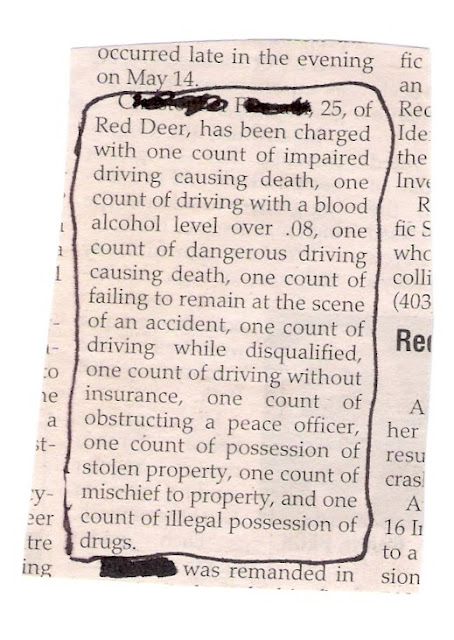 I have crossed out the guilty man’s name whose tragic offence is reported of in this clipping from The Red Deer Express, May 23rd, 2007. Would we not like our name crossed out if the guilty party were us? Maybe we could bear to have our name broadcast above such a litany of crimes if only the charges did not include somewhere the words, causing death.
Imagine the shocking realization of having just killed a man! Think about being suddenly hit with the knowledge of this irreversible fact! A man is minding his own business, only to get killed by your indulgence and negligence! How many of us are guilty of the same crime of drinking and driving that took the life of Chi Luu of Red Deer? Was it our cleverness that saved us from killing? Our talent for driving while drunk? Not likely! We know deep down that we were just one factor removed from causing death. If the nite had been just a bit stormier, or our car just a bit clunkier, or the pavement just a bit slicker, then it would have been us!
What will we do about this? Decide not to drive drunk anymore? I hope so. But the frightening thing is that even if we resolve not to drink and drive again, there is a point we reach in our drinking at which we lose our ability to judge and our fear of taking the risk. What then? Do we resolve never to get drunk? I hope so. But what if we are that type of person for whom ‘one drink is one too many and a thousand’s not enough’? Do we drink no more at all? I hope that’s what we do.
The drunk driver in this case is reaping what he sowed. “Be not deceived; God is not mocked: for whatsoever a man soweth, that shall he also reap” (Galatians 6.7.) Even if he is penalized with just a few years in prison, does he not reap in his conscience a continual harvest of guilt? But what if you should find in the end that this man got into the kingdom of heaven and you didn’t? “What an outrage! That’s not fair!” Does my proposition perhaps tempt you to put up exclamations like these into God’s face? But what if the Lord’s salvation is for repenting sinners regardless of their kind of sin, and you refuse the offer that this man accepts? Then for all your careful driving and your measured drinking, the door of heaven shuts you out; and in spite of the criminal’s careless party, he is whisked on through that same jeweled door by the holy angels of God. Does this make you mad? If so, you are the offender now, dear sinner. And your offence is twofold at least: your offence in not feeling yourself a great sinner, and your offensive rejection of God’s offer of forgiveness. The Lord says, “Be zealous therefore, and repent” (Revelation 3.19.)
Posted by thebibleandthenews at 3:00 PM No comments: