TRUMP THE STATESMAN (A SONNET FOR THE MAN OF 2017) 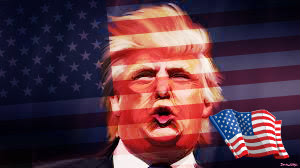 Once in awhile—no, more rarely than that,
A time or two, or ‘once upon a time,’
A man steps forward, endorses a pact,
Then starts to enforce it, line upon line.
Who dares to rail when finally a statesman
Discharges duty with all of his might?
What kind of pest, that kind of citizen?
‘Crapweasel,’ says Malkin, or parasite.
Who are they, really, who in Washington?
McCain, McConnell…so many are red,
Every democrat, House Speaker Ryan,
‘The Cartel in DC,’ thanks good ole Ted!
Man’s worst enemies are those of his house,
Even a daughter! if not his dear spouse.


For those who are not up on the political facts, some of the words and phrases in my simple sonnet need to be explained. ‘Crapweasel’ is an epithet that appears in the subtitle of Michelle Malkin’s latest book. Those who are ‘red’ are republican. Trump’s daughter Ivanka is a deluded leftist. His wife I do not know about; therefore, ‘if not his dear spouse.’ And Ted Cruz labeled politicians in Washington who collude in the interest of themselves at the expense of the American people, ‘the Washington Cartel.’

Arguably against more opposition than any president has ever faced, President Trump has done wonders to resolve domestic problems and foreign predicaments. To name only two of his significant feats: the American economy has picked up substantially, and North and South Korea are engaging each other in conversation. The friendly talk going on in Korea may be nothing but the accidental result of Trump’s foreign policy. Even the fallout from how he acts is often salutary; such is the wisdom of this man’s mature approach. I would not be shocked if North Korea began to noticeably westernize during Trump’s administration on account of his powerful sway. Would it not be wonderful if it ceased to be a dictatorship, or at least one as strict and insular as it presently is? President Trump has already accomplished more than I expected he would, though it may be that, under pressure, he will bend on immigration, and thus, fatally diminish his basic support system. The man deserves, nevertheless, to be honored for all the good that he has done in 2017. Obama received a Nobel Peace Prize even before he began to manifestly tear down and destroy; Trump faces a possible coup for building his country up and for standing up for it while abroad. Obama was celebrated in spite of exposing his citizens to mortal danger; Trump is derided for doing his utmost to protect all Americans, even the ones who call for his assassination.

This sonnet appears on my modest blog before it appears anywhere else because I am the one who wrote it. Though my sonnet is less remarkable than those composed by Shakespeare, it is nonetheless Shakespearean in form.

Posted by thebibleandthenews at 10:01 PM No comments: