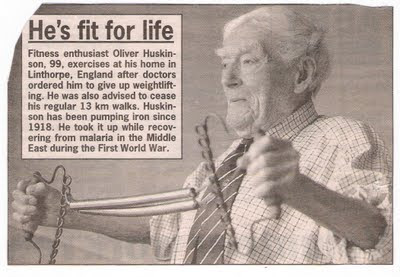 Oliver Huskinson began fitness training in 1918. (He was a little ahead of his time.) The fitness craze really began in the 1970’s alongside Participaction commercials on Canadian television. Training devices like the springs you see in the picture (or at the thrift store) were very popular then. What forty year old man doesn’t remember some lusty boy, maybe himself, busting his chops while trying to do curls with this booby-trapped invention?! Or maybe catching the skin of his chest in the springs?! But all of that’s beside my point.
Maybe Mr. Huskinson’s story will encourage you to do some participaction. But you’ll probably not reach the age of 99 no matter what you do. And even if you did live for that long, and with vibrant health, so what? ‘He’s fit for life,’ it says. But how much longer can he have to live? What then? At the age of 130 Jacob told Pharaoh, “Few and evil have the days of the years of my life been” (Genesis 47.9.) The lesson I see there is that if Jacob the saint regarded his earthly pilgrimage as an evil one, how urgent it must be for the rest of us to get right with the God of Jacob? Jacob wrestled with the angel, and won the blessing. What does this teach us? That real blessings, like salvation, are had through wrestling with matters that are spiritual. How spiritual are your weights and your running shoes? Only a dumbbell will focus too much on these things.
Carnal man will always be obsessed with adding years to his body of sin. In vain he tries to beat death by improving a body that is programmed to die. “The grass withereth, the flower fadeth: because the spirit of the LORD bloweth upon it: surely the people is grass” (Isaiah 40.7.) If the ultimate cause of death is the LORD, then who can prevent it? A curse from the Almighty is what saps your strength. His curse is what sends you down that one way road to yonder cemetery. Does the LORD kill for nothing? The curse is in you because you are guilty of sin. Are you guilty of cursing the God who has cursed you? Do you lie, lust, steal, or sleep around? Then you are guilty. Death and hell are at the door. Death you cannot avoid. But Jesus Christ can help you miss hell. You have much to learn about this. You need a Bible, not another exercise gadget.
Posted by thebibleandthenews at 8:12 PM No comments: 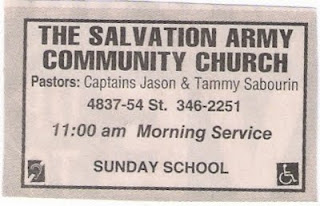 Red Deer Advocate, 2007. Now you might be thinking, “What a boring news clipping for someone to comment on!” But wait for it! What if I should take you right through this advertisement, as through a porthole or a door, and you come with me into this church for a glimpse at the goings on in there? It may be that we will see a sad spectacle, indeed so depressing as to be something of a melancholy marvel!
This is not to paint all Salvation Army churches with the same brush, though I think the wise man, if a wise man could be a gambler, would not bet that such a church could be entered into at random for the hearing of an actual salvation message on Sunday morning. I hold in my left hand, as I write this with my right, the recent titles, texts, and substance of what was preached by one of William Booth’s own denominational (I will not say spiritual) descendents. Here are the titles: Tomatoes & Tulips; God’s Desire in a Pile of Dishes; Richard Dawson, Hammers, Hatchets, & the Church; Jesus, the Wizard, & Toto; Life Lessons from a Coconut Cream Pie (the word ‘cream’ spelled in French); and Poultry, Prison, & Potty Training—Is Contentment Possible. Now what does 99% of this have to do with the Bible—with Salvation—with Jesus! Maybe the best thing that can be said is that some alliteration was used for effect. But what is that but a mere aesthetic element? The Bible texts that are meant to coincide with these titles, of course, have nothing to do with such silly, infantile musings. There is no mention, for instance, of coconut cream pie, not even a French one, in Ecclesiastes! I must grant that the sermon notes taken down by the saintly woman who allowed me to see them has the pastor quoted as saying a few things like, “Without God we would just be heading toward a hopeless eternity” (Jason.) But judging from her candid Christian testimony and the rest of the notes that she took on the sermons, this kind of statement from the man is empty of any real point, force, or meaning, for there is no definition nor method of salvation laid out in his messages. Most of her notes go something like this, “He had many laughing after telling about the Thanksgiving stuffing at his brother’s place when he was 18. After the laughter, how is it that the Holy Spirit can come forward in seriousness? Is this method of attracting people appropriate for a pastor behind a pulpit who should be reaching out to the souls of these people?”
I remember these five titles in a book of Spurgeon’s Revival Sermons: The Story of God’s Mighty Acts; The Blood of the Everlasting Covenant; The Necessity of the Spirit’s Work; Predestination and Calling; and The Minister’s Farewell. Are these lofty themes not better (as the sky compares to the gutter) than tomatoes, hammers, Toto, pie, and potty training?! And are the acts of God and the blood of his Son not more saving and edifying to souls than gossipy drivel about game-show hosts, hockey, Britney Spears, and Paul Henderson?! Such potty-mouth topics ought to be too embarrassing for a clergyman’s ear, let alone his mouth! These are not sermons, but ditties of the lowest order among clergy of the most clownish sort! I recall being alarmed a bit at the tone sometimes taken by Spurgeon and Lloyd-Jones in their lectures on preaching. Both held up certain types of preachers to ridicule in order to discourage and prevent further blasphemy and buffoonery in the pulpit. But if a mocking tone in a Seminary could have prevented this Salvation Army Captain from uttering what these great preachers justly condemned, would it not have been worth the professor being thought of as a slanderer? Up until recently my acquaintance with the Salvation Army was almost nil. Now my happy ignorance has been replaced by a wretched knowledge of what passes for preaching in this odd branch of Christendom. That there are some genuine Christians in these pews I am certain of; that they can put up with jokers in the pulpit for more Sundays than one, I am in amazement about. Spurgeon did rightfully cast his verbal wrath upon a sermon he heard that was merely about whether an angel actually descended to stir the pool at Bethesda. “Dying men and women were assembled to hear the way of salvation, and they were put off with such vanity as this! They came for bread, and received a stone; the sheep looked up to the shepherd, and were not fed” (p. 79.) What would he say about these grubby, juvenile Salvation Army sermons?!
Posted by thebibleandthenews at 1:06 PM No comments: