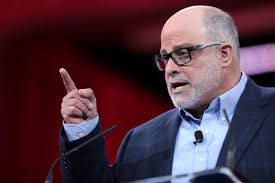 I keep up with politics through radio broadcasts. The radio host who best informs me along that line—one of my best discoveries for figuring politics out, is Mark Levin. I listen to his broadcast regularly, at least some of it, and I have gained much understanding through him. No one speaks the truth about Washington DC with as much passion as he does while maintaining as much hatred of corruption as he does. One cannot love one’s country without hating what destroys its goodness and greatness. Mark Levin is a man that the founding fathers would not be ashamed of, which is about the best definition of a patriot that one could come up with.

There is no sensationalism on the Mark Levin program. Nor does he promise coverage on a story that he saves until the last minute, like certain hosts on Fox do in order to hold listeners hostage. He does participate in commercials, which I hate. He has developed a manner of slipping seamlessly into his pitch in order to trick listeners into hearing these commercials. But I can put up with this because he seems to actually use the products that he endorses, and because I’m usually speedy enough to mute the radio before the pitch has a chance to take off.

I have been listening to Mark Levin for several years now. During this time, I have noticed something creep into his disposition—something that is beginning to dull the luster of his passion. Mark Levin is not a theologian; I do not expect him to know the Bible very well. But he does remark on religion sometimes. I gather from some of his statements that his view is that any religion is fine as long as it includes a level of morality that does not undermine the certificates that the republic was founded on. That he seems to hold this view of religion does not surprise me; most conservative radio hosts believe exactly that. This view of religion will prove, in the end, to have been less than adequate. It is a religion of works, not grace. It is a religion of mere morality. We should not expect Christian virtue in persons who are not Christian; that said, the words ‘conservative’ and ‘pride’ should not be found together.

Like other radio hosts that have become popular, Mark has enveloped himself in a protective bubble that only his favorites know how to penetrate. It is triste when persons become remote on account of their celebrity status. To some extent, their inaccessibility is unavoidable because of the volume of mail that comes their way. They can’t pay attention to, much less consider, every concern. Any warnings that they might have listened to for their own good are never heard; and therefore they continue hazarding themselves. Proverbs 16.18: “Pride goeth before destruction, and an haughty spirit before a fall.” This verse is one of the most frequently quoted, surely, in the whole history of Bible dissemination. Rightly so, for pride is one of the sins that men are most often guilty of, and in peril because of. I agree with Mark that we should not be cheerleaders; we should criticize as well as praise, whenever we perceive that someone on our side deserves it. We both disagree with Reagan on that point. A person who does not want his listeners to be mere cheerleaders should welcome, then, reproof from a friend. Proverbs 27.6: “Faithful are the wounds of a friend; but the kisses of an enemy are deceitful.”

Mark Levin is not my personal friend. I have never seen him. I am not even on the outer edge of his inner circle. Nevertheless, we are on the same side politically. So, in that sense, the man is my friend. His political views are essentially the same as mine: Judeo-Christian/Capitalist. If we are wise to pay attention when political foes accuse us of pride, it must be foolish to dismiss a warning that comes from a friend. That pride goes before a fall, only a fool will deny; that it bodes well to heed the warning of a friend is obvious.

Mark Levin has become proud—sort of puffed up about himself. He yells a lot; but that’s righteous indignation. He calls people names; but that’s because he’s furious. He does impressions; but those are funny, if not called for. He can be rude; but that’s because he’s impatient. His intro waves him in as ‘the great one’; but this preamble is part of his old pride, not the growing pride that I am referring to. So what is it? What do I mean when I say that he has become, or is becoming, proud? Here are a few examples. (1) The man frequently refers to his ratings, even while he prefaces the reference with something like, “Now I could sit here and talk about my ratings….” It is pride that makes him talk about his ratings in spite of his promise not to do so. (2) He is proud of other radio hosts repeating what he has to say, even while he denounces them for sharing the information. He is in the vanguard, you see; they are just ‘backbenchers,’ which is precisely what he calls them. I agree that they are, in fact, backbenchers, but it is far from humble of Levin to state the fact. He should leave it to others to do so. Proverbs 27.2: “Let another man praise thee, and not thine own mouth; a stranger, and not thine own lips.” Mark is Jewish; he should know the Old Testament just a bit. (3) He gets upset when others use the word ‘Statist’ to identify the political strain that Obama wielded in Washington, as if no one else has ever used the term. That’s pride again. (4) When he is mentioned in the news, he reaches for a pretext to bring that into discussion. This is prideful behavior. (5) Sometimes he asks his call screener to clear the board to make way for a new question that he has, which means that the callers who have been waiting for an hour or more to speak to ‘the great one’ are dismissed. It all comes down to this: he thinks he is greater than he is. This is especially noticeable when he slips into his affected lisp. Let’s make the lisp point number six. (6) “People ask me,” he says, “how can you write such scholarship?” Has anyone ever asked him that? Is he that much of a scholar? It is far from difficult to find fault with his ‘scholarship.’ He points out, reading from one of his books, that tyrants have ‘infinite ideas.’ Is that great writing? To say that tyrants have an infinite number of ideas would still be incorrect, but at least it would be closer to the truth than to say they have ‘infinite ideas,’ for ideas are not infinite, are they? After reading from the stock of his ‘intellectual property,’ as he terms it, he says, with an affected lisp, “I should send them my books.” This affectation is revolting to listen to. When speakers become proud, they try to sound important. But in trying to sound important, they expose their pride. They get so big in their own eyes that they must add something extra to the sound they make. The lisp is the weight that so many of them think will convey their importance. The fake lisp is a common fault, frequently found among prominent ministers. The tone he uses when he says the word ‘substantive’ is not as irritating as the lisp, but it’s full of pomposity as well. I could have made that into point number seven. But I’m trying to go easy on him.

This demeanor, people, is worrisome to the point of deserving a warning. This prideful manner is what it is like to have a head that is just about fat enough to offset one’s balance. Then comes the fall, and there are many ways that that can happen. So my advice to Mr. Levin is that he set some time aside for reading and meditating on the Proverbs of God. Proverbs is a great headshrinker; it is the place where even the fattest head can be shrunk back to its normal size. Many kernels of the gospel may be consumed there, moreover, which content is nothing less than the Bread of Heaven in Old Testament form, and which is, without a doubt, the way  of salvation from sin and hell that each person needs, no matter how pure and decent his politics may be. I would not recommend that book of his dad’s on Proverbs, either, but the actual Proverbs. “Pride goeth before a fall.” 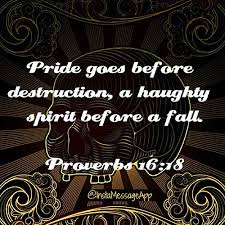 Posted by thebibleandthenews at 7:55 PM No comments: