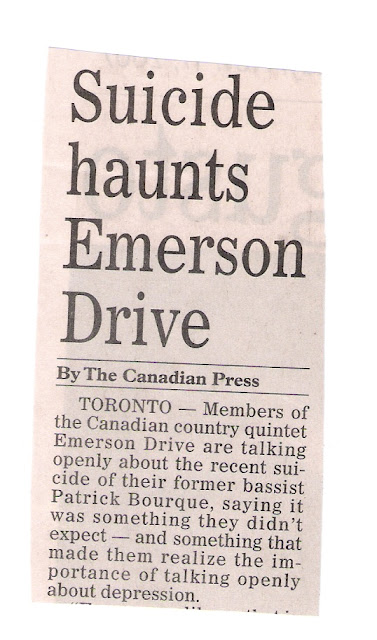 Red Deer Advocate, November 17th, 2007. I do not go out of my way to follow what’s going on in the Entertainment Industry, no, not any segment of it. I do read the newspaper occasionally though. Since the suicide of a national award-winning musician could no doubt cause many to reflect upon the moral issue involved in such a death, it is well to bring some wisdom to bear upon the subject. Suicides are becoming more acceptable these days on account of the growing sentiment in favor of killing for what many (not in this article) would call ‘mercy’s sake.’ This obliges us to speak out when we can in favor of preserving life and preventing the souls of would-be self-murderers from the curse of eternal ruin.
It is stated that Mr. Bourque killed himself because he was depressed. Close friends of his could probably tell us something more about why he was depressed. But really, only God knows what all the bullets and darts are that converge to pierce and despair the soul, and from where they come. Many of our deepest sorrows and regrets we keep wrapped up in secrecy, don’t we? The Bible records at least six cases of suicide. Saul and his armorbearer killed themselves to prevent the Philistines from falling upon them; Ahithophel suicided in a fit of self-pity after his counsel was rejected; Zimri did it after his coup d’etat disintegrated; Samson brought the house down upon himself and his enemies as a last ditch act of revenge upon the Philistines; and Judas hanged himself because, in his own words, “I have sinned in that I have betrayed the innocent blood” (Matthew 27.4.)
There is little question among wise men that a person unsaved at the moment of suicide is doomed to hell. The following questions come up in Christian company: Seeing there is no time for repentance, can a self-murderer be saved? What about the Christian suicide? Samson killed himself through God’s answer to his request for supernatural power to bring the Philistine palace down upon everyone present. This is the nearest thing to an affirmative answer to the question of whether the suicide of a saint, or Christian, can ever result in a happy, heavenly issue. But Samson’s circumstances are seldom, if ever, ours. And he is a fool who would be encouraged by an exception, if indeed the death of Samson even qualifies as one. How foolish and thoughtless, anyway, must any suicide be, when there is no absolute proof that any soul resorting to this measure is safe! Besides what may be deduced from the narrative portion of the Bible, we next resort to extra-biblical thoughts on this moral dilemma. Shakespeare and two 19th century clerics called Colton and Mountford are all worth quoting. But the best thought I have found comes from William Perkins (1558-1602) in a Puritan exposition on spiritual depression by William Bridge in 1649. Regarding the Christian suicide, Perkins weighs in cautiously, “I dare not say they are damned because of their former life; and I dare not say they are saved, because of their sinful death.”
Posted by thebibleandthenews at 12:31 PM No comments: