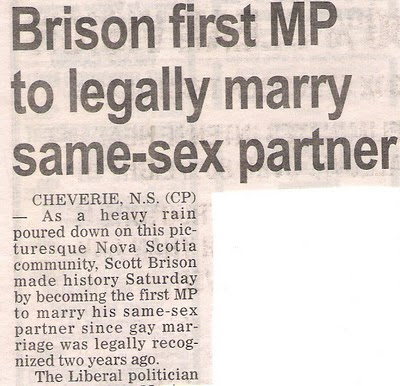 There are many ‘firsts’ that could be accomplished by the man who would etch his name into history for the public to look back upon some day in remembrance of. One might wish to be the first man to step into a fight in the righteous cause of defending the defenseless. One might wish to be the first man to rush through flames to save a schoolhouse full of children. One might wish to be first on the scene to bear witness to some unexpected marvel. ‘First MP to legally marry same-sex partner’ (Red Deer Life)—this too, in the opinion of many Canadians, ranks right up there as a dignified first to have one’s name sealed to. Already this first is being adored as a courageous, groundbreaking act in the cause of tolerance, equality, and progress. Like feminism’s many firsts, this Idol will no doubt grow to such legendary status as to be hailed as a godlike deed by those debauched quarters of our media.
But in the Farther Future of Eternity this first will be assigned its rightful place and rank. It will be brushed over to the left among the goats, lies, and blasphemy, and then down among the worms and the fire. Woe to those Canadians who go to their graves believing, as the guests did on the dishonorable day in question, that a monster-marriage of two men is “something we need to celebrate”! Can you be ready to meet God when you love wickedness?
Who was on the guest list for this “history-making event” in August, 2007? Politicians like Liberal Leader Stephane Dion and former Prime Ministers Joe Clark and Paul Martin. Imagine standing before God as a political influence responsible for making legal a lifestyle judged by God to be nothing less than an abomination! Every politician who did not oppose the introduction of same-sex marriage into Canadian law approved it. “He that is not with me is against me,” said Jesus (Matthew 12.30.) And therefore he who takes no stand on Jesus’ side of an issue stands on the opposing, rebellious, ungodly side. The book of Revelation is called “the Revelation of Jesus Christ” (Revelation 1.1.) Jesus reveals in there that whatsoever “worketh abomination” will have no part in the enjoyment of future glory (21.27.) To support same-sex marriage is to ‘work abomination.’
Who works abominations more eagerly than the church (United) that performed this grotesque ceremony? The Gospel says to turn from sin to be saved by Jesus. The churchgoer who embraces what Jesus condemns proves by this that he has believed a false gospel and received a jesus of Satan’s imagination. Look at the headline one more time. Now Satan was the first antichrist; Cain, the first murderer; Judas, the first apostate disciple. ‘Firsts’ are not always good.
Posted by thebibleandthenews at 12:17 PM