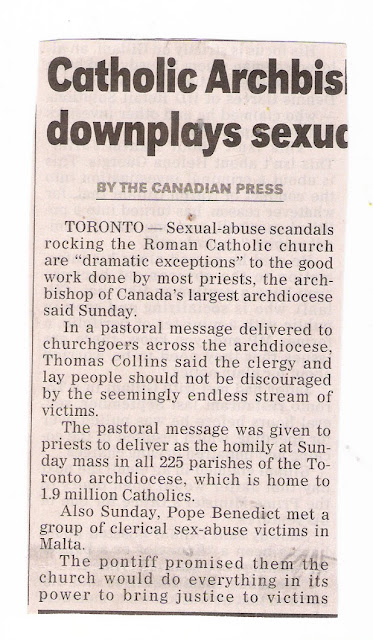 Red Deer Advocate, April 19th, 2010. Says the archbishop drone: Roman Catholic sexual abuse scandals are ‘dramatic exceptions’ to the good work done by priests. In light of all the pedophilic crimes that are being discovered within the ranks of the Roman priesthood, it is more accurate to call these scandals ‘commonplace villainies,’ not ‘dramatic exceptions.’

As to the good work that priests do, it is during their supposed work that they commit their crimes. And what of all the good work that is done by priests who are not pedophiles? Their chief work is to teach or perform ceremonies like the Mass, which is the heresy that pretends Christ can be sacrificed anew to some benefit for sinners, when, in fact, the Bible teaches that there is no more acceptable sacrifice to be made for sin since Christ was crucified on the cross. So these Masses are useless and sinful because they are needless and anti-Christian; that is, they would add to what Christ accomplished, as if his perfect sacrifice on the cross were insufficient. Hebrews 9.26 says that “once in the end of the world hath he [Jesus Christ] appeared to put away sin by the sacrifice of himself.” It does not say that regularly does he appear to put away sin by being re-sacrificed by a priest, but that once he appeared to put away sin by the sacrifice of himself. So it is done. It may never be done with God’s blessing again. The fact that it is perfectly and completely done makes the Mass unnecessary, and sinful to perform. And since that sacrifice on the cross is sufficient to put away sin, it renders unnecessary also, all prayers to Mary and the saints for help, and all good works that one might try to rack up for salvation. In essence, that once-for-all, all-sufficient sacrifice condemns any other attempt at satisfying the anger of God toward sinners. The ultimate sacrifice for sin has been made. God is satisfied with it. And the sufficiency of this sacrifice is what we must trust in order to be saved.

Priests love to ‘work’ with children. Given all the pedophilia that we now know that priests have been guilty of, we cannot blindly assume that the work they wish to do with children is really work. After all the pedophilic indecencies that priests have been caught doing, who could remain so ignorant and careless as to risk the bodies, virtues, and souls of children to obtain some dubious, priestly benefit? If you leave your child with a Roman priest, it is in the face of God the All-Seeing Judge that you do it; and this Almighty God will have the last Word about such ‘childcare’ in the end. Any biblical novice should be able to recognize from his little bit of reading that God cares especially for children. So we must be cautious (especially Roman Catholic laypersons) to leave our children with guardians who are least likely to abuse our children. Roman Catholic priests do not qualify.

The Canadian archbishop is a Roman Catholic ‘yes-man’ who says whatever accords with the wishes and will of his master the pope. And that ’s priests are given a ‘pastoral message’ to repeat is proof that they are not permitted to speak for themselves when shameful scandals abound. They are the pope’s politicians, lower-level drones who speak when they are told to speak and who say what they are told to say. Have they wills and brains of their own? Feelings of their own? Apparently not. The great concern they are brainwashed to promote is the reputation of . Is it not more important, righteous, and holy to throw your concern on the side of the abused children?

Don’t be a Roman Catholic drone, whoever you are. Read your Bible and put up personal prayers to God. He is the only Holy Father; the other one is an imposter. While you pray, never mind your rosary. Why not recycle that? There are none of these to be found in use among the saints in the Bible. Speak to God from the heart, not by rote.

The Roman Catholic spokesman says that you ‘should not be discouraged by the seemingly endless stream of victims.’ Think about that. Multitudes of victims are discouraged. But you shouldn’t be. How does this square with the Bible’s command to ‘weep with them that weep’? (Romans 12.15) You should weep with all the victims, but more: you should be as mad as the hell these pedophiles ought to be cast into! It is unnatural to have no anger about this. If you are not disturbed, ask yourself why. Are you hanging on to your tradition in spite of your revulsion? Are you suppressing your revulsion because you want to continue to believe that Roman Catholicism is true and blameless and that this religious institute may some day open heaven’s gates for you? Surely there is enough evidence by now for you to seriously reconsider your belief that the Roman Catholic Church is the true Church. How many atrocities will it take to make you doubt? What is the true Church? How may I be part of it? How may I get a salvation that will one day look down on the hell these Romish perverts deserve? These are the righteous questions that a holy indignation would ask. Begin seeking answers to these questions, whether you are a Roman Catholic, or just someone who shrinks from criticizing anyone. And why not get a fresh start by setting your Roman version of the Bible aside? You may keep to it; I would have you read it rather than nothing at all. But would it not be nice to have a brand new Protestant KJV in your hand, big and black, authoritative-looking, and reliable? Begin to put your quest in motion. Get to the bottom of this Church issue, and maybe you will get to the bottom of your own redemption while you are at it, which is your greatest need. And may the grace of God through his Holy Spirit guide you. If you like, you may even email me. Ask me any question you like. My email address is in my profile.

Under the new rule of Pope Francis, the rules remain the same. Pedophile priests are protected, drones continue to drone, and victims continue to seek justice.
Posted by thebibleandthenews at 11:08 AM