THE VATICAN'S APPROACH TO CLERICAL PEDOPHILIA 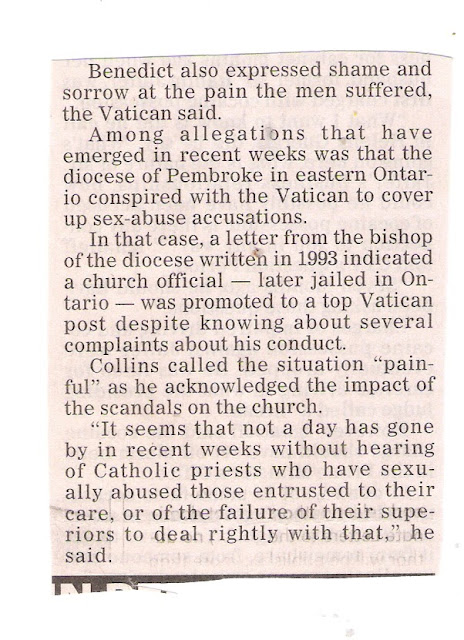 Red Deer Advocate, April 19th, 2010. The has known about child sexual abuse among its priests since at least 1993, according to this piece of news. Those who know their Roman Catholic history will tell you that the is as evil as it is old, and that it has been trying to cover its bloody tracks from the start.

It says here that Pope Benedict ‘expressed shame and sorrow’ at the pain suffered by sex-abuse victims. A person can express shame and sorrow without any repentance going on in his soul and without determining to make restitution for the wrongs done by his priests. This pontiff continues to drag his feet where justice is concerned. When have we heard him rail about these priests deserving jail? Never! A person who is in charge of pedophile priests, if he really had sorrow and shame in his heart about their endless abuses, would be pounding his Bible for justice! He would be assisting the law to root these priests out and get them into prison! But no, all he does is ‘express,’ and usually in the Latin tongue so nobody will understand! He does not preach—he does not demand—he does not guarantee justice. His expression is a show. And to merely ‘express’ is a weak show at that! Yea, it is a much weaker expression of remorse than that of Judas Iscariot: “I have sinned in that I have betrayed the innocent blood” (Matthew 27.4.) Will Pope Benedict confess as much as Judas Iscariot did? Of course not!

Pope Benedict’s concern is not justice. His concern is the same as that of Archbishop Collins, his obedient spokesman. Notice that it is ‘the impact of the scandals on the church’ that Mr. Collins is concerned about. When crimes by priests are still under cover, how does the treat its perverted perpetrators? This news article is poorly written. But it seems to be trying to communicate that the promoted an official to one of its top posts in spite of having knowledge of his pedophilic sins. The treats its pedophiles rather well, even to the extent of handing them promotions! and not just average promotions either! but promotions to top posts! Incidentally (though we do not intimate that Mr. Collins may be a child-predator), Archbishop Collins is now, as of January 2012, Cardinal Collins, so well does he enunciate what Pope Benedict wants to him to say!

I would never say that New Testament Pharisees were as evil as today’s Roman Catholic officials. But the result that follows from promoting perverted priests is the same as that achieved by Pharisees upon making converts: “ye make him twofold more the child of hell than yourselves” (Matthew 23.15.) What is worse than a pedophile priest? Answer: a pedophile priest with more power. How many pedophile priests have been promoted to the rank of bishop? How many to the rank of cardinal? How many have been chosen by cardinals to sit as pope? God knows. And we know this for sure: Church officials who knowingly promote pedophiles to higher posts are not holy and not saved. Therefore their doctrines, practices, and religion must be examined against the Bible. And then the seeker after truth must either remain in the Roman Catholic pew, or else take a walk. Can the narrow path to heaven be through the widespread darkness of Roman Catholicism? Begin your research with that question in mind. A bias in favor of holiness is okay.
Posted by thebibleandthenews at 1:01 PM