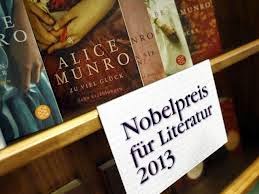 (October 2013.) Alice Munro has gone down in history as the first Canadian to win the Nobel Prize for Literature. It is always wrong to gloat. But sometimes, like this time, it is especially wrong to do so.

The Nobel judges may have lived up to their mandate by their choice in one respect. I do not dispute that. They are supposed to pick a writer whose body of work is idealistic; Munro’s body of work is idealistic feminism; feminism is just now the popular idealism; therefore a writer like Munro must win. Where feminism is not popular, it is at least shocking. This is why Munro’s books cause a sensation in many languages. One of her short story collections, Runaway, is summed up by her like so in an interview (my paraphrase): “Women flee from relationships [the bondage of marriage] and predictability at the age of about forty because a new pattern of life is desired.” This particular trend in feminism is already dated, for feminists are against marriage now. Now they just have to flee shack-up situations. But it does fit in with the feminist ideal.

CBC radio personnel, in response to the news of Alice Munro winning the coveted crown in literature, briskly rummaged through their archives to rebroadcast all of their Alice Munro material. They did not have far to dig, for stuff like that is always kept near the surface over there. They also did their best to create some new material. And so the Nobel win was chosen as the subject for CBC’s Cross-country Checkup, the wide radio phone-in program. On there it was made to appear as if everyone from coast to coast was happy about Alice Munro’s prize. This was an appearance, nothing more. Cross-country Checkup runs for two solid hours. My call was received before the first half-hour was up. Because CBC determined to allow no dissenting word on the subject, I did not get past the screener. This was a kind of replay of the other time I phoned in to recommend a Christian book when Rex Murphy solicited calls about favorite books on any subject. The Existence and Attributes of God is not something that CBC would like the nation to hear about through its airwaves, though it is a public station that is supposed to represent all Canadians, not just atheists, Muslims, and liberal activists.

My dissenting word was going to amount to this: Alice Munro writes commonplace prose; unlike the great short story masters, she describes, rather than intimates, the grosser sins, which is easier to do; and she won the prize because her feminist views run through her stories in an age that is particularly accepting of feminism. In effect, I communicated this to the screener. She then desired some particulars from me to back to up my remarks, hoping that I would not, or thinking that I could not, submit a shred of proof. But I was ready with the three stories of Munro’s that I had read, and with my notes. To my comment that these stories do not compare well with those of Hawthorne or Poe and that they contain vulgarities, the call screener simply threw out the old line that ‘times have changed’ and then promised to call me back to put me on the air. That never happened. If our criterion for greatness in literature is whatever body of work boldly promotes the idealism of the day, there is no limit to how low literature will sink. And if ‘the times’ is our rule for what we accept and celebrate, then feminists better rejoice if the age comes to male chauvinism and books are given prizes for waxing mundane upon that!

How can I judge a woman’s award for a body of work when I’ve read just three of her stories? Having listened to her interviews, and now to many of the comments from readers who phoned in to praise her, I know that her body of work is fairly represented by these three stories. Moreover, the reviews on Amazon substantiate this.

So why is it especially wrong to gloat about this win for ? First, because the stories lack literary merit. The stories are disabled by insufficient differentiation of characters, poor composition, poor construction, confusing content, and flat endings. Some of these disabilities were haplessly admitted by some of the callers. One caller tried to speak in a positive way about ‘mundane detail,’ for example. Another caller was more careful to call this boring content ‘subtle detail.’ A third caller even confessed that she could not always understand Munro’s stories, but quickly reproved herself for being too ‘analytical,’ which dumb reproof was immediately seconded by the host. Of course, more highfalutin comments were the norm: Munro “carves a groove through the psyche that goes straight to the soul” and some of her sentences “make you gasp and wonder how she did it.” Here is one of the best lines from her story, Dulse: “until he turned into a ropy-armed old man, shrunken, uncomplaining, hanging on to a few jokes.” That’s okay, but it does not make me gasp and it certainly carves no groove to my soul. Mostly, what you find in a story like Dulse is modern cliché writing like this: “ the poet. Morose, messy, unsatisfactory . The unsatisfactory poet.” The sentence fragment is a modern cliché that passes for poise in prose. When overused, it can only show up lack of skill, tact, and good sense. And why must feminist writers choose female writers for characters? They do so because they are continuously writing their own biographies into their stories, and if not their biographies, then their fantasies. They can’t get beyond themselves as subjects.

The second reason why it is especially wrong to gloat about this win for is because the stories are indecent. School boards from the 1970’s did not reject Munro’s books without good reason. They rejected her books because of the corrupting morals they contain and the vulgar language. The times have changed in a bad way, for her books are widely accepted now, probably even in schools. It is one thing to curse and to speak filthily; but to put that kind of garbage into writing and to push it upon students is worse by a great degree.

From a replay of an interview given in 2004 (by Wachtel), I learned that Alice Munro must be credited with getting the F word in The New Yorker. To this fact she proudly replies that each story she submitted had something like that in it. I learned that in one of her short story collections, infidelity occurs in seven out of nine stories. Without even reading these stories you can tell that that sin is not set in the context of shame and moral rectitude, for Munro says that she doesn’t like stories in which the adulterous woman can’t go out and about in society. Stories like that “are like claws trying to fasten me down,” she admits. What are these claws? These claws may be defined as the moral conviction arising from an accusing conscience. Suppressing these claws is what Romans 1.18 is about: “ungodliness and unrighteousness of men, who hold the truth in unrighteousness.” The passage in which this verse appears is one of the only places, maybe the only place in all of Scripture, where lesbianism is explicitly forbidden and condemned. That story called Dulse is about, among other things, a man in denial of his writer idol being a lesbian. But it’s not like I have to prove that lesbianism is cast in a good light by Munro. It’s not something that she would deny.

If gross immorality invites the wrath of God (Romans 1.18), and gross immorality is what Alice Munro celebrates in her stories, can it be a good thing to gloat about her Nobel Prize? When we gloat over this win, we are declaring that we take pleasure in the gross immorality that her fiction promotes. By gloating over this win, we inject ourselves into the italicized portion of the following verse: “Who knowing the judgment of God, that they which commit such things are worthy of death, not only do the same, but have pleasure in them that do them” (Romans 1.32.)

If Alice Munro is the maker of grossly immoral stories for people to take pleasure in, she stands condemned by that verse even more than her gloating readers do. How wise is it to screen her from negative criticism such as I was prepared to give out over the radio? The higher that sinners go in the world with their sins, the less they are likely to be reproved for them along with warnings to repent. This woman is in her 80’s now, and frail, maybe too frail to travel. Who is going to have access and courage to warn her that she is ready to drop into the claws of God’s wrath? A word of caution to her, however curt, might turn into a cry upon her conscience causing her to reconsider her whole body of work and the sin that put it all into motion. Alice Munro rejoices over the fact that these days women her age live with their lovers, by which is meant, in fornication. She calls this a freedom to live a pleasanter life. Compare that opinion with Romans 1, and if you believe the Bible to be authoritative, you must conclude that Alice Munro is not ready to face the Judge of all the Earth. Alice Munro forsook her family in need in order to attend university. She says that she did this ‘without qualms.’ Now (according to the interview in 2004), even though she is glad to have done that, she feels guilty about it. She is still conscious, then, of suppressing the truth in unrighteousness, though she would never phrase it biblically like that. So there is a faint hope that she might repent before she dies. But who is going to preach to her?

Shameful cross-country gloating about Alice Munro’s Nobel Prize for Literature is especially wrong to do. Those who gloat about this win reveal that they are blindly patriotic or ignorant of literature. They act like those persons spoken of in Romans 1, who take pleasure in gross immorality, upon whom the wrath of God will soon descend. This shameful cross-country gloating is the worse thing that can happen to the guilty victor because praise tends to puff persons up and steel them in their sins.
Posted by thebibleandthenews at 9:26 PM