THE QUEST FOR IMMORTALITY

The Calgary Sun, October 3 rd , 2009. All men would be immortal if given the option and means. Immortality is the immemorial pursuit. I... 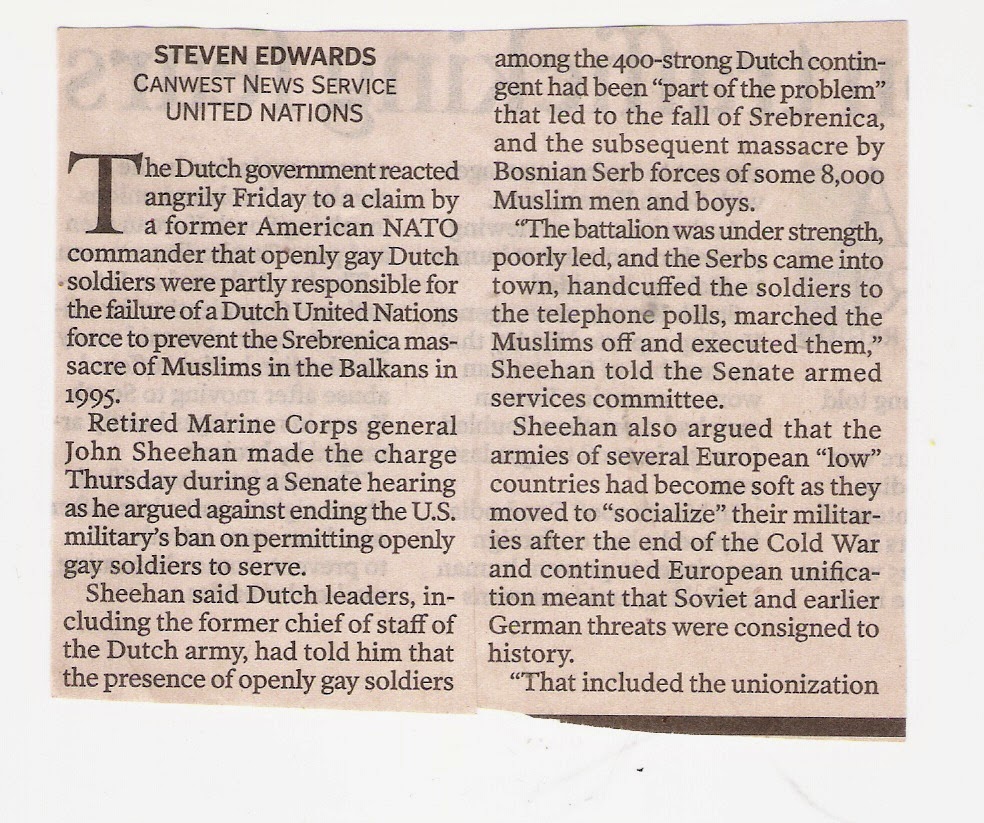 Gay men are not equal to manly men. They are effeminate, unmanly, and unfit for mannish duty. A man exhibiting female character traits acts as if he’s in between genders. Or he seems to be a compound of both. He’s like a rooster clucking instead of crowing. He can’t lay eggs; but neither can he rule the roost. He is a hen-like rooster. If you throw him into a cockfight to fight for you, do not be surprised when your side comes out on the bloody, losing end.

Gay men should not serve openly in our militaries. They should not serve in our militaries at all. They all seem to like papier-mache and to know how to fashion something out of it. Maybe they could serve in some artistic capacity. No, not even that. Just look at the stuff they turn out in Milan for the catwalks there! And their requirements for the models who wear their contrivances, how destructive are they?! The anorexic lifestyle is largely due to gay fashion designers who insist that their models look like prepubescent boys. Gay fantasyland is a dark, destructive place.

It is not difficult to spot a gay man, usually. In harder to determine cases, the deviant proclivity will betray itself to observation before long. You might find him in a ‘compromising’ situation with another man, which is what ‘outed’ a gay man when I was in the service. Gay men should be found out and kicked out, for their own safety as well as for everyone else’s.

The Bible does not condemn homosexuality without reason. It is destructive one-on-one, for unnatural practices lead to personal injuries. And it is destructive to society, whether we believe the opinion of General Sheehan or not. AIDS would not have taken so many lives if homosexuality had never been practiced. This is an irrefutable fact. Listen to the Bible. As much as people hate to have this verse quoted, yet listen to the command again: “Thou shalt not lie with mankind, as with womankind: it is abomination” (Leviticus 18.22.) We cannot expect blessing when what is abominable to God is sanctioned by us.

You who call yourselves Christians or evangelicals but who defend gay ‘rights,’ listen up. Does God hate something and then love something? Does he hate sin and then love it? Is God not the same today as he was yesterday, just like the Bible says? God’s moral policies are never changing. If you think God changeable, you have no reason to be sure that he will love you forever. In fact, you have no reason to believe that you have received his unconditional love, for this changeable god that you have faith in cannot be the true God. The reason why men are not consumed is said to be on the ground of God’s unchanging nature. “For I am the LORD, I change not; therefore ye sons of Jacob are not consumed” (Malachi 3.6.) Do you suppose to be in the covenant so long as you deny the ground that upholds it? A changing god cannot be dependable. And the unchanging God will consume you unless you hold that he is immutable. Search out the rules of a covenant; be not with one of your own design. It you are a Christian who is tempted to be popular instead of controversial by siding with the gay agenda, Malachi has a message for you. “Return unto me, and I will return unto you, saith the LORD of hosts” (3.7.) You rob God of his nature by holding that he embraces what he once abominated. You rob him of his immutability. If you do that, you are a devourer. God is into rebuking devourers (3.11.)
Posted by thebibleandthenews at 1:14 PM