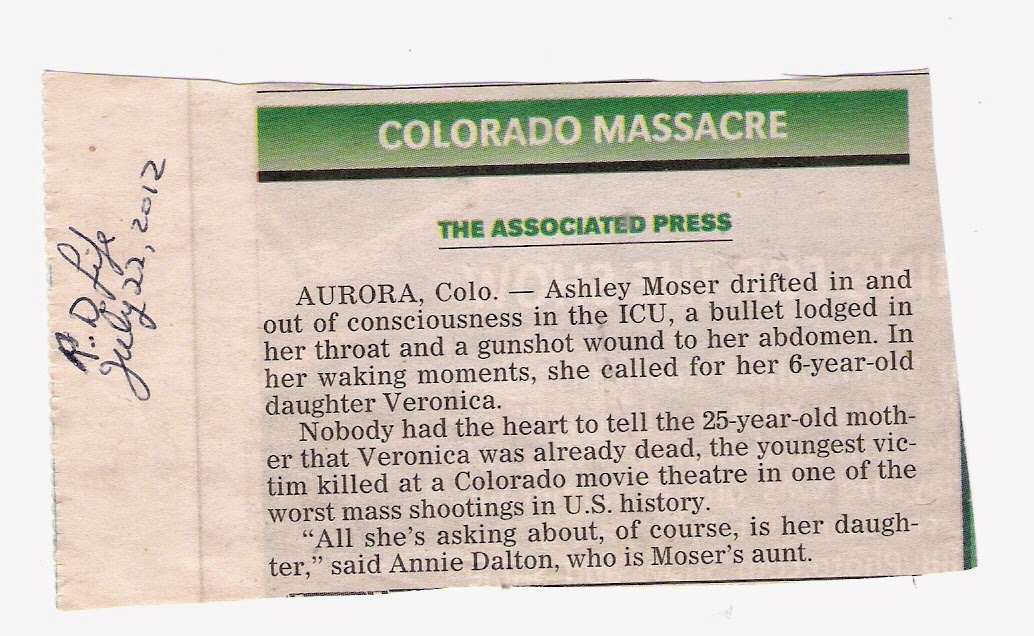 Red Deer Life, July 22nd, 2012. At least twelve people shot dead, sixty or so others injured by tear gas and bullets, a theatre full of moviegoers traumatized, families of victims in shock, a nation wondering why, the world looking on in horror: another mass shooting has occurred.

The main attraction on this night was not the movie, but the stage upon which the movie was playing. The shooter interrupted the main event in order to become the main attraction. The Joker is not in this Batman film, I hear. But from the shooter’s perspective the joke must be that the Joker showed up and stole the show. I looked at some of the stills of this film. The genius of this type of film seems to be its ability to transport cartoon-like apparatus into the real world. We should not be surprised that a media addict would reverse this feat and try to transport himself into a cartoon. When virtual reality becomes confused with reality in a world that refuses to moderate and distinguish between right and wrong, acts of violence like what happened in the Century 16 theatre in Aurora are inevitable. “Woe unto them that call evil good, and good evil; that put darkness for light, and light for darkness; that put bitter for sweet, and sweet for bitter!” (Isaiah 5.20.) The virtual world that the shooter fused with his own is called, ‘The Dark Knight Rises.’ Until I saw the title in print, I thought it was ‘A Dark Night Rises.’ When our heroes are dark knights, dark nights will follow as night follows day.

About a week after the massacre, we drove up to the marquee on the local theatre playing the accursed film. Batman appears on the outside of this building as a dark figure looming down. The horns on his cap are prominent as if to emphasize a sinister character. If persons from generations preceding the advent of Batman were to see this dark fellow on the wall, they would point him out as some sort of devil.

The title is written down below the Batman figure. Just above are written the words, ‘A Fire Will Rise.’ In hindsight, does that assertion not strike us like some kind of apocalyptic prophecy? “The way of the wicked is as darkness: they know not at what they stumble” (Proverbs 4.19.)

Yes, I get the fact that Batman is supposed to be a force for good against evil. But this film, so they say, is unusually violent. You might argue that the public likes what’s right more than it likes what’s wrong on the basis that a film like this draws viewers who come to witness right prevail. But why are films like this popular? Is it because people crave righteousness? Or is it because they love looking at violent sights? And do they mind very much how tainted with evil their heroes might be? The public is not completely ignorant regarding right and wrong. And it instinctively tries to protect itself from evil to some degree. PG-13 is a hint that it knows that virtual violence is unsafe entertainment; the age restriction is proof that it tries to protect kids from seeing evil and being traumatized, desensitized, and pleasured by it. The age restriction exists because the public knows that sights of evil must not be too promiscuously unleashed. Because people love to watch evil, they try to harness the dragon in order to ride it and enjoy it up to a point. Truly, they overlook the fact that evil sights affect adults too. Riding this beast is not that easy even for adults. What is the difference between a film like this and a sober documentary on the holocaust? In the former, violence is glorified; in the latter, it is reprehended. I don’t go to the movies. But I watched the two-minute trailer for this Batman flick. “Even after 9/11,” I thought, “people continue to glory in sights of chaos and carnage. What will God’s response to that be but a negative one?”

“Train up a child in the way he should go: and when he is old, he will not depart from it” (Proverbs 22.6.) Children properly trained will grow up in a world distinct from that which is merely virtual; then with clear heads and moral fiber they will shun virtual violence and be saved from many a snare. You step right into the devil’s snare when you enter a theatre to watch violence being celebrated on a screen. That snare closes on you when the fiend who lurks nearby decides to celebrate violence in his own way.

Some pundits are upset that a ‘black cloud’ has descended upon ‘The Dark Knight Rises.’ A black cloud of disapproval should have descended upon the movie as soon as the violence it contained was advertised. This kind of ‘entertainment’ trains us up in a bad way. Other pundits are discussing whether the shooter’s rampage was caused by nature or nurture. The truth is that men are natural born sinners and that when they are nurtured with virtual violence they will act out sins of violence on the stage of reality. Few will become mass murderers. The acts of each watcher will vary. Some will sin on a small scale. Others will cultivate evil plans to play out on a large scale. Sin natures that are nurtured in darkness must act out at some level. This Joker acted exactly in the way of a screen character that movie watchers revel in. In fact, what happened in this theatre is precisely the kind of scene that moviegoers would flock to the theatre to see. If what happened in this theatre were a piece of fiction released in a trailer to advertise a movie, people would love it, rave about it, and make plans to see that movie. They would eat it up. Why? Because they love to play with evil, wickedness, and sin. They love to play with fire, but foolishly believe that they can do so without ever getting burned.

The governor of Colorado said this to the victims of USA’s latest mass murder: “We will honor you by celebrating life, by living our lives a little better.” Will this honor come to pass? Is watching ‘The Dark Knight Rises’ a celebration of life? What is it to live ‘a little better?’ Is it to go to more dark movies? By fearing the LORD (Psalm 112.1), “there ariseth light in the darkness” (verse 4.) This is how you honor the victims: by stepping into light. This is the answer—the way of prevention against the consequences of blurring reality and glorifying darkness. Kick at it all you want, but the truth will not change. Addictions to virtual realities confuse the mind; darkness breeds violence; and the saving reality is the LORD of light.
Posted by thebibleandthenews at 7:32 PM