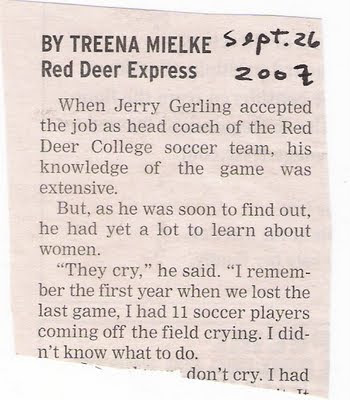 Feminism has come a long way. Who can deny it? Women have won the right to vote. They wear pants instead of dresses. They crop their hair. They hang out in bars. They sleep around. Lassies now spit in public. And maidens walk around with uncovered behinds. That’s progress! Grown men are scared to say as much as boo against the feminist ‘cause’ because the wrath stored up from the suppression of her ‘true self’ is poised to unleash and devour at the slightest provocation or offence. But still, the female sex is the weaker vessel. And no matter how hard the older, rougher feminists try to fashion lionhearted she-men out of tender babes, the girls, weak vessels that they naturally are, still crack like pottery to loose their tears, especially when adversity ends in defeat.
God has charitably prevented feminists from expunging from the fawn-like sex the ‘sugar and spice and all things nice’ that she is providentially endowed with. Mannish men would lose the will to pursue her if the female person were made completely warlike and invulnerable.
Girls and women are taking up the attitude and putting on the appearance of male-like toughness. But their native weaknesses remain. And these weaknesses are taken advantage of by opportunistic men. The woman, being the weaker vessel, craves the security and romance of a marriage contract. “He took me in his strong white arms/He bore me on his horse away” (Christina Rossetti.) This is her desire. She can never entirely disown it. Even the so-called career woman, the woman who thrives on ‘girl power’ and whose motto is ‘I am woman, hear me roar’—even she craves the marriage certificate, even while, and especially when, she protests most against it. Our modern woman feels forced to obey the feminist command to act as if she needs no man. But her natural desire is for a lord to call her own. So she “takes on a sexuality that looks identical to male fantasy and calls it sexual liberation in order to legitimize pandering to men while still looking like a strong woman” (Joan Sewell.) If a woman can’t get a man by virtue, she’ll try and get him by vice. But this type of ‘sexual liberation’ she adopts liberates man to exploit her, as George Gilder put it. Do men not hold women hostage to sex by empty promises of marriage? Not only do these men abuse woman virtue, but they waste woman’s valuable time while they do it, sometimes until these poor concubines have lost their allure; and hence from there they must go it alone, broken, and bereft of the principal means for securing the marriage they’ve always dreamed of. This heartbreaking aftereffect is happening on a large scale. With virtue gone and beauty fading, what’s left to attract a man, good or bad? The intervention of God is greatly needed at such a time! The woman’s heart then cries about how “Sweet sweet love was/Now bitter bitter grown to me” (Rossetti.)
The weaker vessel is meant to dwell with a husband who loves and cares for her so much that she is not ashamed to call him lord (1 Peter 3.) But without such a husband and even with one, who could be more relieved than a weaker vessel to accept the invitation of Lord Jesus?—,“Come unto me, all that labour and are heavy laden, and I will give you rest” (Matthew 11.28.)
Posted by thebibleandthenews at 9:11 PM