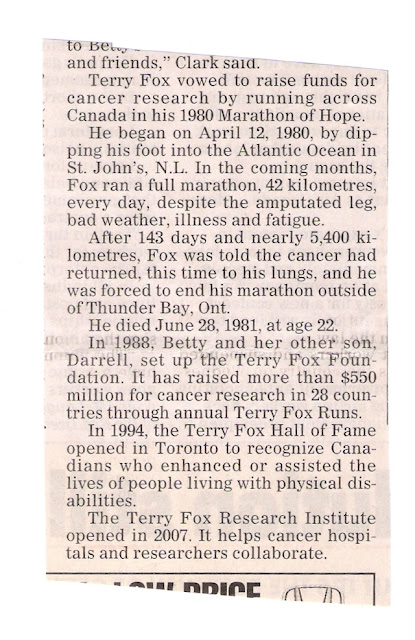 Red Deer Advocate, June 18th, 2011. Terry Fox was a hero. He did a cancer run before it was the cool thing to do. And he did it, marathon-style, day after day, even while cancer was killing him. Had he not exerted himself so, maybe he would have lived much longer than he did. But he chose to fight to the death so that others might live. Who will not admire an exit like that?

And who will not admire a person for being the first cause of a great hope?—: that cancer will be beaten. Can cancer be beaten, though? If half a billion dollars has been raised in Terry’s name, how many billions have been raised overall? Where has all that money gone? Where does it go? Why isn’t cancer beaten yet?

Do donors deserve answers to these questions? Who will give some full account of all that donor money? What part of cancer will your next twenty-dollar bill beat? The Bible encourages its adherents to give generously. “And if thou draw out thy soul to the hungry, and satisfy the afflicted soul; then shall thy light rise in obscurity, and thy darkness be as the noon day” (Isaiah 58.10.) But generous giving is not the same as thoughtless giving. To be the good money steward a person should be, something should be known, should it not, about where the money one gives will go and for what purpose? “Every prudent man dealeth with knowledge: but a fool layeth open his folly” (Proverbs 13.16.) So while we should never be misers, neither should we throw money around imprudently. Questions need to be posed to all cancer-fund solicitors, and verifiable answers received from them, before any more millions, or even before one more twenty, is dumped into that bottomless pit called Cancer Research. But do this gently because fundraisers are usually (though without enough premeditation) just trying to do good. And many of them are phoning, or door-knocking, or running because cancer has hit close to home.

I would like to see a rundown of exactly how a half-billion dollars was spent before I give in to the next emotional request for money. That is the firm, prudent stand to take.
Posted by thebibleandthenews at 11:37 AM