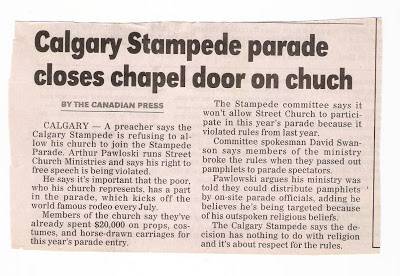 Red Deer Advocate, May 26th, 2010. Some groups that profess to be followers of Jesus Christ are ignorant enough of the word the Christian religion is based on that you’ve got to be a little skeptical concerning their understanding of the gospel that they are so zealous to preach. The decision the Stampede Committee came to here was a good one.

Can you imagine the apostle Paul spending a pile of money on parade paraphernalia and then whining to a Roman governor to let him join the festivities at the Coliseum? No? Case closed.

We should rejoice that these particular evangelicals were stopped from mixing their religion with a State fair. And there is no warrant whatsoever for being anxious that evangelism was prevented because: (1) it is contrary to the Bible for Christians to force themselves upon the State to promote their cause; (2) evangelism is not apt to succeed when attempted through disobedience; (3) Christians who remain this ignorant about Church/State boundaries are likely to put a false concept of the gospel out, and, if so, have not been called by God to evangelize in the first place.

We should be glad when the State, whether for the right reason or not, excludes Christians from participating in venues they have no business joining. In the words of Jesus, “Render therefore unto Caesar the things which are Caesar’s” (Matthew 22.21.) These Christians shouldn’t whine about wanting to be part of a worldly event. They should do their evangelism (which is probably substandard at best) separately. Christians are called to witness to the world, not take part in worldly fairs. “Be not conformed to this world” (Romans 12.2.)
Posted by thebibleandthenews at 10:43 AM