THE COST OF A CHILDISH CULTURE 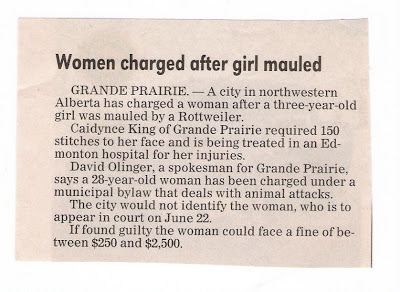 Red Deer Advocate, May 15th, 2010. Sadly, when a child is harmed it does not cost the guilty party much. We Canadians are okay with having our children bear the cost of our childish culture. This is certainly the case because attacks like this one are usually shrugged off, and laws that would punish the crime either don’t exist or don’t get enforced. Think about it: more outrage is heard from the public when some Neanderthal sports hero is caught with steroids in his blood than when one of our beloved kids is bloodied by a beast! Our concerns are ill placed in .

The original article from two days before this one (same paper) tells the rest of the story. The parents of the child were playing baseball while the child was left to run back and forth from game to game. Someone had to bring her monster dogs to the childish affair. And the unguarded child got mauled.

It is a sin not to grow up. And when that sin becomes the cause of harm to a child, it should be treated as a crime. Both the negligent, immature parents ought to be punished, and much more the senseless woman who had no business owning beasts for dogs. If this incident were recorded in the Bible, it would say something like this: ‘And while the father and mother were playing at being kids, the beast of a foolish woman rushed upon the child and rent the child’s head in sunder.’

What would a just penalty look like? It is risky to go delving into Old Testament Jewry for direction on civil justice. But wise men would be able to pick and choose and to modify according to modern circumstance (Deuteronomy 17.) In them days, an ox that ‘pushed with his horn’ could cost the owner of it as much as his life (Exodus 21.) Oxen were necessary then to own. Who needs to own a Rottweiler? To start with, the owner of it should pay with lost skin from the sting of a lash, and then be made to pay child support perpetually. This would mitigate insecurity issues in the child.

That first article records that the father of the torn child was “torn about whether the dog should be put down.” How sympathetic! His sympathy could not be better placed to excite righteous hatred from those who actually love children. Maybe we should pretend that in the heat of the moment he was too distraught to know what to say to the reporter, and for this reason came across like a detached, unfeeling psychopath instead of a loving, protective parent. Yes, it is tempting to pretend the best, for it would take one as great as Solomon to divine a penalty fit for the parent more in love with the beast than his own child that was mangled by it!
Posted by thebibleandthenews at 12:56 PM