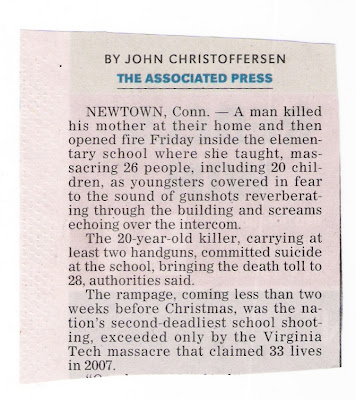 (Red Deer Advocate, December 15th, 2012.) Those people who enjoy the killing scenes in movies and video games contribute to the culture that spawns the deadliest, most horrific crimes. That is my little thesis here. It’s rather a big one, actually. They support, in some way or other, the darker side of culture when they enjoy the mortal bloodshed and manslaughter that is served up by directors of movies and makers of video games. They spend money on this darkness; and then they promote it by word-of-mouth.

Like me, you’ve probably read about this tragic news both in print and online. When I went online to read about it, I was reminded of something that can never be preached about too much: the connexion between school shootings and media morals.

I scrolled through the news of this massacre rather quickly because I could not bear to read too many details about the young lives that had just ended so coldly, violently, and unjustly. When I got to the bottom of the screen, here is what I saw: an ad featuring a celebrity starring as the warrior, Thor. You can tell just by the sinister atmosphere injected into this ad that the production promises a lot of exciting, remorseless killing. So on the same page with the news of this latest school shooting, there was an ad about free-for-all killing. “What a connexion,” I thought, “and right there for everyone to see!”

Who can meditate for long on the terror these children must have been in while waiting helplessly for their turn to get shot? And yet we need to meditate on this in order to steel our resolve against the trivializing of murder that goes on in video games and movies. We need to do it in order to become advocates against murder as a trivial act that people get pleasure from. I don’t mean that we should push for laws banning needless violence in movies and video games. That would be impracticable and probably unwise. Outlawing certain movies, games, or guns is not the answer. I mean that we should make people aware of what they are watching in the hope that such amusements will be shunned. Is watching pretend killing better than actually doing something? Life can be more meaningful. There are better ways of spending one’s time.

I’m no expert when it comes to movies and live theater. But is it not true, generally, that in movies the actors kill and then move calmly on, while in plays the actors are tormented by the act? You see, we’ve come a long way by ‘pushing the envelope.’ Killing, in media like movies and video games especially, is no more treated like the tragedy it really is. If the pretence on the screen is that there is no grief in killing, that lesson will get played out in the real world by disturbed, confused individuals. Life imitates art, after all.

actors (I’ll say generally just to be generous) do not agree that there is a connexion between killing in movies and killing in real life. They are illogical people, and they like it that way. But I will show, anyway, that there is a connexion. No one would deny, probably, that movies have contributed to women trading dresses and skirts for pants. That’s a moral influence: a connexion between movies and real life. Whenever a famous actor dons a certain look, movie-watchers copy. That’s where hip-huggers come from. That’s a moral influence: a connexion between movies and real life. Moviegoers gathered at the drive-in to watch Smoky and the Bandit in the seventies. I was there. Guess what happened? There was a lot of spinning, squealing, and speeding on the way out. Coincidence? No, moral influence. Actors would no doubt agree so far. But they conveniently begin to deny moral influence as soon as the copying runs into graver matters. Ah! moral influence is caused only regarding matters about which they are comfortable admitting the connexion! Their logic stops just before it implicates them in an uncomfortable way. Their logic dare not proceed any farther! They do not want to be tagged as real-life villains contributing to the immoral, or amoral, society in which school shootings take place. Who will blame them? A few of us will. And God does.

Quentin Tarantino was ‘very annoyed’ when Terry Gross posed the question of a connexion to him. She asked him if he loses his taste for movie-violence after a real-life massacre occurs. His answer: ‘not for me.’ He would not watch something like The Wild Bunch on the day in question, though, he says. What a mortified soul he is! What are the causes of school shootings like this? His answer: ‘gun control and mental health.’ Quelle surprise. He forgot to include movies. What does bother him about movies? His answer: when animals are harmed in the making of them. I guess he had to show sympathy somewhere after calling ‘revenge violence’ in films ‘fun’ and ‘cool.’ How does this director justify all the violence in his films? He deceives himself by the lie of exaggeration. His opinion is that real-life slavery-violence was a thousand times worse than what he illustrates in Django Unchained. This leaves him a lot of room, you see; he does not want to be chained by moral restraint! He could have handled a lot more violence than he put in there, he says. I guess we know what to expect from the envelope being pushed a little farther down the line!

Mr. Tarantino says that what he tries to do in his films is make ‘a mystic experience.’ Then he adds, “But it’s make believe.” When your object is to give viewers a mystic experience in films that play up killing but play down contrition or consequence for the act, there’s a very good chance that you’ll meddle with someone’s head in a negative way. A mystic experience is ‘an intimate knowledge of’ and ‘a direct communion with.’ Is it safe to have multitudes in our midst getting intimate knowledge of casual killing on a regular basis? Should our society be creating, encouraging, and perpetuating direct communion with regretless slaughter? Violence in the real world will result through mysticism of that sort.

Many are the contributing factors to school massacres: the side-effects of antidepressant medication, and inferiority complexes, for instance. But media morals, especially those communicated through movies and video games, are partly, and maybe largely, to blame. There is no question about it. The association is a logical one that we have proof of. Regarding some of these school shootings, we’ve seen killers copy, nearly to the letter (as it is written in the envelope that is pushed), the killing sprees in the films they’ve been mystical with. And still the connexion is denied!

“Moreover he burnt incense in the valley of the son of Hinnom, and burnt his children in the fire, after the abominations of the heathen whom the LORD had cast out before the children of ” (2 Chronicles 28.3.) I was passing through this area of the Bible just the other day. The word is spoken of Ahaz, king of , who was from the line of David. What applications can we make from this today? Ours is a society that sacrifices its children to the gods of modern culture. Every time you look at a movie that shows a lot of killing you get thrilled by, you are burning incense to these evil gods, and you have Ahaz for your father. Think about it. When is killing in its proper context? Get familiar with the Bible. Look at the life of David, for instance. Yes, his killing of Goliath is sensationally portrayed with affecting words. But the passage does not excite merely. It comes with the lesson that he who fights for God can bring down evil giants. And the larger context shows (most notably in the Psalms) how tormented David was by this lifestyle of war. “They also that seek after my life lay snares for me…For I am ready to halt, and my sorrow is continually before me” (Psalm 38.12, 17.) Much of David’s life was like this: ‘continually’ means more than a moment or two. And David was a lover of many women. But David the playboy died ignominiously enough, unable to make love to the fair virgin damsel who was slipped into bed with him to warm him up (1 Kings 1.1-4.) When the Bible tells us of heroes but leaves their sorrows, shames, and the ends they come to out of it, the stories are briefly told (like when David’s mighty men are eulogized.) And we have the larger Bible context to inform us that all men stand condemned for their faults and that every one needs the grace of God and the Saviour whom God sent. A violent film that thrills will leave you feeling empty afterwards. That is not the result you get from reading killing scenes in the Bible. If anything, you leave with serious thoughts being suggested to you. This is the case because the Bible is the word of God. But it is also because killing, in the Bible, comes with context. And the reader can feel it. We get more than blood and gore in the Bible; we get knowledge of sin, warnings of judgment to come, and appeals to repent and believe.

Through familiarity with the Bible, you can learn to discern when killing, in media, is appropriately sketched or epitomized. Hopefully, you will learn to discern that, and then be compelled also, to search out the Saviour for the forgiving of your sins. Every person not saved before entering the next world will be made to pass through a fire that has no end. Or, to put it another way, he will not pass ‘through’ the fire, but be immersed in it forever. Get yourself a Bible and read it, won’t you? Ask for the one with the ‘thees’ and the ‘thous’ in it. That one should carry more conviction to your soul.

Notice, finally, one last lesson from that verse in Chronicles. What was done to heathen peoples of old can be done to us too. The LORD casts off nations that sacrifice their children to the gods, whatever those gods happen to be. Nation, sacrifice your children to gods like movies, movie stars, television, television stars, the internet, and video games, and the LORD’s mercy will withdraw from you. Is it not happening already? It has been happening for some time. The LORD’s arm is getting shorter and shorter. He is withdrawing more than extending at this time.
Posted by thebibleandthenews at 5:29 PM