A TOKEN OF JUDGMENT 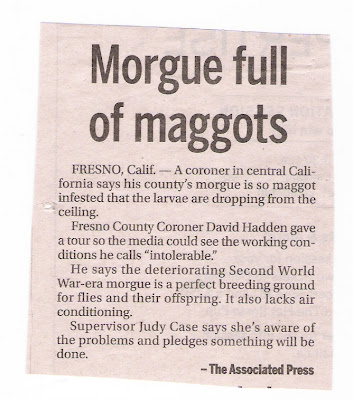 March 22nd, 2009. Only one time in the whole Bible do flies appear as something other than a token of judgment. In that place, they are the nuisance that causes the ointment to stink (Ecclesiastes 10.1.)

Flies, and their maggot offspring, sometimes referred to as worms, are, next to the serpent, the lowest of the low in God’s animal kingdom. Kill as many as you please. There will be plenty left to feed on your rotting carcass yet! It is said of king Herod, that because he was content to be praised as a god, “he was eaten of worms, and gave up the ghost” (Acts 12.23.) What a way to die! What horror movie scene could equal this death for its revolting effect upon an audience? What worse fate than to die by a disease of worms through the curse of God? But worms await us all. And they will have their way. Each vital body is a future morgue for maggots in waiting. This is so because the curse of God for sin has determined it. Worms are creatures of God sent forth to prosecute the dirty work of judgment. There is no preventative that will stop the divine resolution.

To avoid worms and corruption, some rely on cryonics, others on cremation. “If I ascend up into heaven, thou art there: if I make my bed in hell, behold, thou art there” (Psalm 139.8.) What does this teach? It means that there is no escape from God. What he has decreed will come to pass. If the worm misses your body because you freeze it or burn it, no matter, God has an undying worm for the body raised hereafter: “where their worm dieth not, and the fire is not quenched” (Mark 9.44.) The nature of this worm is not so easily ascertained. But can we agree that it is a sign of negative things to come? You did not know that your body, no matter what becomes of it on earth, will be raised to exist in another world? The Bible is of Eastern origin, but not so Eastern as to deny you a body in hell (Matthew 10.28.) In that same verse we are exhorted to fear God on account of this truth. God causes the common worm to consume on earth. He will cause the immortal worm to gnaw in hell. What do you think? We are powerless to become something more significant than food for puny worms. Is it reasonable to presume that we will have the self-power to keep greater worms away on the other side? If you are so certain to be self-determining in the next world, would you not prove some of that power to keep the worms at bay in this world?

May the Lord take some truth to your heart before your day of decay begins. The only Man who ever exercised inherent power to prevent decay is Jesus Christ: “neither his flesh did see corruption” (Acts 2.31.) Jesus died for the sins of man; but being without sin, and being God, he overcame. Come under his protection by faith, and all creatures of nuisance and judgment will one day be banished from your body, soul, and sight for ever. “Believe,” with the eunuch, “that Jesus Christ is the Son of God” (Acts 8.37.)
Posted by thebibleandthenews at 12:09 PM