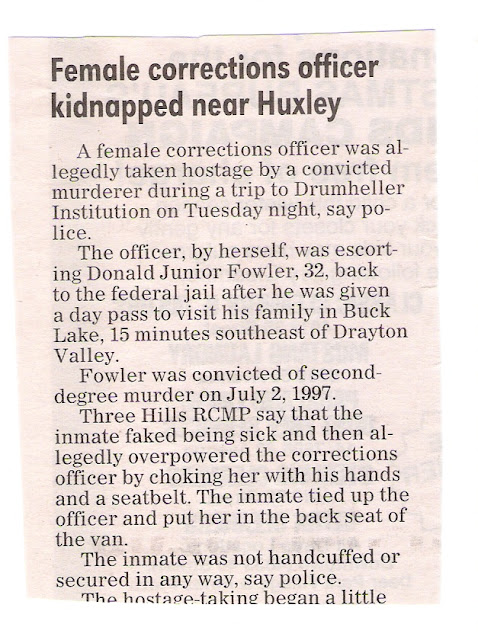 Life, October 23rd, 2011. Proverbs 31 maps out the boundaries of a woman’s place. That place extends beyond the confines of the home. But sometimes, because of events like the one in our news clip, we are tempted to say ‘get back in the kitchen’ to some woman or other. This female corrections officer (a politically correct term for prison guard) had been safer there; let’s admit it. Though things turned out okay for her, it was not through any strength of her own, but because the convict restrained his. Because man is stronger than woman, he could have pulverized her.

Because of ‘bleeding heart’ policies like day passes for murderers (no handcuffs please!) and ‘equal rights’ across the board, citizens are put at risk of being murdered by a rampaging escapee! Do you think this woman had any regrets for overstepping her place in society, which move put whole communities to a deadly hazard? She is conditioned to feel no remorse at all. Oh, I can hear how some sissy-men would come to her defense: ‘Even the biggest, strongest, most capable male officer might have been taken hostage.’ Yeah, maybe. But this female corrections officer, certainly. That’s the point. The reason for ‘draconian’ restrictions on who should be selected to maintain the peace is to restrict incidents of the kind recorded here. Restrictive rules are made to reduce certainties to maybes. That’s how you protect the public. Everyone knows that a strong fifteen-year old farm boy can take down any woman in the world. The genders are not equal. Pretending they are and then making laws tailor-made for what we wish were true can only end in real tragedies that could otherwise be averted. Women have no business trying to protect us against criminals of the stronger sex. When push comes to shove, as it often comes down to in the law enforcement sector, women can’t handle the showdown. They’re not made according to male specifications. We are fools to believe they can do a job for which they are not endowed to perform.

To have women for corrections officers should seem as ridiculous as, and is more dangerous than, pitting women against men in the NFL. Woman was made from man, just as the Bible says; this is why she is weaker; and her role is to be under her source’s guidance and protection. Let’s, for woman’s own good, begin to lean toward policies that treasure and shield our weaker vessel who is so prone to accept deceptive opinions to her own hurt. “The woman is of the man” (1 Corinthians 11.12) and “Adam was not deceived, but the woman being deceived was in the transgression” (1 Timothy 2.14.)
Posted by thebibleandthenews at 11:48 AM