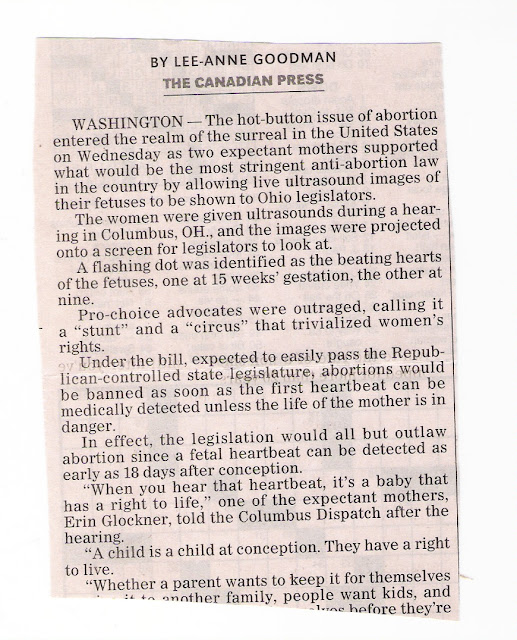 Red Deer Advocate, March 3rd, 2011. Science continues to show, with increasing persuasion, that the Pro-Life position is correct. As far as science can penetrate into the mystery of what Pro-Choice proponents believe to be just a fetus, life will be found. A choice for abortion will always come down to a choice for ending life.

The Pro-Life position is that life begins at conception. This position cannot be improved upon. But the facts of this life, when brought to light by applied science, improve the position’s image. Years ago we might have wondered whether a heart is even formed so soon after conception. Now we know that not only is a heart formed just days after conception has taken place, its beat can be detected then too. Scientific advances will improve the Pro-Life position to the minds of many.

But we cannot stand on science alone to prove the Pro-Life position. Our application of science will always be limited. If life were shown in the womb just ten seconds after conception, some would hold out for five. If shown at five, they would hold out for less. Those who resist the strongest evidence are often the legislators who wield the power to either defend life, or let life be extinguished by status quo policies. The power of God’s word is the force we need.

Christians can stand with confidence on the biblical base to prove what we believe is true and right. “Thus saith the LORD that made thee, and formed thee from the womb” (Isaiah 44.2.) You were a ‘thee’ in the womb, a person. Science, because it points to what the Bible professes, backs up that profession and lends credibility to it. But the power is with God’s word.

We must not leave the Bible out of the abortion debate. The Holy Spirit is likely to enforce the word of God, more than anything else, to minds and hearts. With his regenerating act comes the conviction and fortitude this position needs. Common grace (through which scientific facts are bestowed) will sometimes persuade someone to a godly position; but grace in the heart will do it for sure. Without an act of special grace upon the heart and mind, legislators, in the present permissive milieu, even if they believe that abortion is murder, will not, probably, have the conviction and courage to defend pre-born life. Our present (2013) Canadian Prime Minister (Conservative leader Stephen Harper), for example, is Pro-Life but believes that it’s okay to dismiss the debate so long as silence and passivity ensure political success. Legislators must be preached to and prayed for, whatever their political stripe. Not only are pre-born lives on the line, but the souls of these legislators. Our position must be preached from the Bible; and the gospel from the Bible must be preached as well.
Posted by thebibleandthenews at 10:40 AM