THE OUTER LIMITS OF ROMANTIC DESPERATION 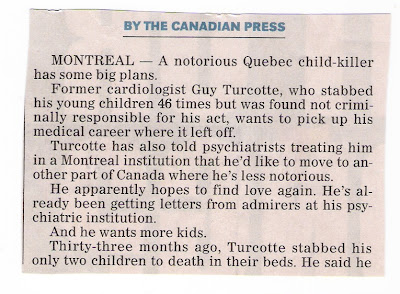 Red Deer Advocate, November 5th, 2011. Of course this murderer was found ‘not criminally responsible for his act.’ Of course he should have been executed for his crimes at once. And of course he will be allowed to remarry and to father more kids that will be traumatized for having a child killer for a father. This is progressive, I mean backwards, , where liberal justice will bay for your blood when you neuter your own cat, but will keep you safe when you kill your own kids. Yes, the headline states that he should ‘remain in care.’ Let’s take good care of him. After all, he stabbed his kids to death because he was ‘distraught.’ Poor murderer!

Now that my position on capital punishment has been restated (for I state it every chance I get), I want to address what is merely incidental to this depressing news. There exist women out there (women who should be naturally endowed with an instinct to nurture kids) who are so desperate for a man that they will chase after a child killer in order to get one! We’ve all heard stories of this stripe before. In this case, the women might be admiring this killer’s status as a doctor (which status comes with money, credit cards, and house privileges), but not necessarily. In any case, even after the psychologist warns that this man could kill more kids, some women can’t help admiring him and wanting him for their very own! Do we need any further confirmation that the Bible speaks truly about women being easy to deceive? (1 Timothy 2.14.)

Granted, men are not what they used to be or should be. But do desperate women really have to resort to fighting over a child killer? In Isaiah 4.1 we read of seven women vying for the same man, which number is figurative to signify their desperate want. But at least these women could claim some justification for their desperation, men having become scarce on account of war.

Canadian women are not bound to marry this man or that man against their will, which is not the way it goes for women in places faraway, and not the way it usually went in times far gone. I value that liberty. But are the choices that women make any better than what might have been made for them? There is an easy-to-remember verse that all women should apply in their ongoing search for the perfect man. “Mark the perfect man, and behold the upright: for the end of that man is peace” (Psalm 37.37.) One commentator, Nathanael Hardy, says that the word ‘perfect’ is used to emphasize how upright this man is when compared to men who are openly bad (like the doctor who murdered his children.) So by using nothing but the powers of observation, both Christian and secular women could easily zone in on their eligible knight just a bit. I knew a man who had known a woman who made a choice between two righteous men by leaning on the word ‘mark’ in this verse, and taking it for a name instead of a verb! The other man, poor slob, lost out just because his rival was called Mark! My name is Mark, and still I would not coax a woman, no matter how righteous, intelligent, quiet, and attractive, to interpret the Bible like that! To all you desperate women out there, listen up, murderers, generally speaking, don’t make good soul mates, you know what I mean?
Posted by thebibleandthenews at 11:43 AM