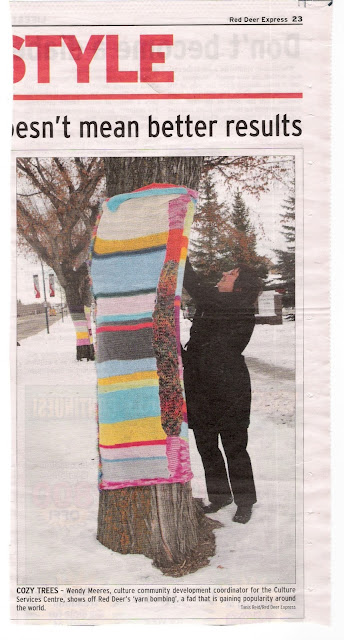 (Red Deer Express, January 9th, 2013.) This ‘yarn bombing’ is not an April Fool’s joke. Neither is it an idea to replace pink pelicans on the lawn for someone’s birthday. It is a growing ‘fad.’

Suppose a child came up with this idea. Or suppose a child got talked into participating in it. In either case, you could easily convince her to knit a scarf instead, maybe, and to accomplish something serviceable by all her knitting and stitching.
When I see a middle-aged professional woman ‘yarn bombing’ a tree, though, I almost lose hope for humanity. Yes, full-grown women who are into this fad probably do good works of some sort as well. But ‘yarn bombing’ a tree (forgive me for having to speak my mind) must be, if anything is, a cry for something significant to happen in one’s life. I speak for myself here, no one else. Just let me tell you what I hear in this odd act. I hear this being shouted into the air above the tree: ‘Give me a thrill, a life, a real job, or even cancer at this point, because I’ve completely lost my way down here! Look what I’m reduced to doing just to get some joy and meaning into my life!’

Would a full, satisfying life include ‘yarn bombing’ as a hobby? It would not. It could not. ‘Yarn bombing’ is a cry for help, a cry for significance, a cry to feel something, a cry of despair. Reach out to ‘yarn bombers,’ I’m not kidding. They are in the same camp with these desperate people who go to meetings in order to hug perfect strangers. I’m not making this up. I think those meetings are called ‘cuddle parties.’ What if these two groups came together? What if the ‘yarn bombers’ and the ‘cuddle party’ crowd converged at some community hall? Some interesting relationships would no doubt result!

Western culture, with its free time, affluence, loss of direction, and absence of principle, is an unreasonable, lonesome, pathetic, sad world.

Hutterites and Mennonites have many faults and errant beliefs. Concerning practical matters, however, they are worthy of imitation. My guess is that they are much too sensible and sober to ever get pulled into a ‘yarn bombing’ party. I can see their grave faces in my mind, full of concern, pity, and wonder about ‘yarn bombers.’

Let’s get even more old-school than colony-livers and black-attired cultivators. What does the New Testament have to say about ‘yarn bombing’? It speaks to such a mindless activity by way of contrast, “shewing the coats and garments which Dorcas made” (Acts 9.39.) Dorcas did something useful and wonderful with her balls of yarn.

Let’s go back farther still. That ‘virtuous woman’ from Proverbs, what did she do with stuff like yarn? She clothed her household with scarlet and made coverings and girdles (31.19-24.)

We could go back farther, to the holy use of what was made for the priests to wear, and then to the coat of many colors that made Joseph feel special. These garments are full of meaning. But let’s go all the way back to Genesis and the fall. Though their work in sewing fig leaves together was for covering their shame, and though it made an entirely unsatisfactory covering for their sin, Adam and Eve had the good sense, at least, not to put their ‘yarn’ on a tree!

The animal skins that God gave to Adam and Eve to replace their fig leaves with, these were not given without life being taken and blood shed. This act was the first sacrifice for sin; and it prefigured and promised the last. The silly, insensible fads that we fill our time with, they point out the emptiness in our lives, our wandering sinfulness, and our time-wasting purposelessness. There is a covering for that; it is the anti-type of that first covering in the Garden of Eden. This covering came about through loss of life and shed blood too. This covering is the righteousness of Jesus Christ. This is the pure white robe that God sees upon the sinner who takes Jesus for his salvation from sin, hell, and misery.

God never knit in vain, and neither should we. With the righteousness of Christ that may be the sinner’s through faith in his name, there comes that renewal of spirit that sanctifies the life with meaning, thus generating the beginning of good works, which works ought never to degenerate into a fondness for fads.
Posted by thebibleandthenews at 3:49 PM