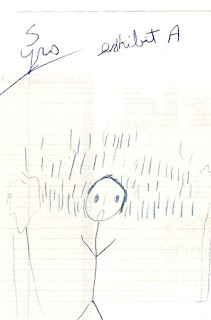 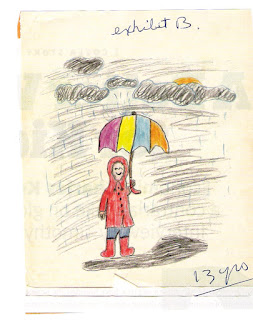 These drawings from third-world kids are taken from ‘Christianity Today,’ the magazine. The drawings are central to the argument in the cover story that child-sponsorship, at least through ‘Compassion International,’ works. Lots of figures are thrown around to convince us that it works. A sponsored child is ‘27 to 40 percent more likely to complete secondary school’ and ‘14-18 percent more likely to obtain a salaried job’ when he grows up, for example. How might these figures be verified by us, though? We either trust Bruce Wydick, the writer of said article, or we do not.

He must have learned somewhere that a professor of economics is more convincing when he adds illustrations to his formulas; hence the drawings that he includes. And this is where our trust has reason to be suspended. This is where we have reason to believe that ‘philosophy and vain deceit’ (Colossians 2.8) are being used to convince us that child sponsorship works. This ‘philosophy and vain deceit’ is what popular Christianity is like today.

The first drawing is what an unsponsored child drew when asked to draw ‘a self-portrait set in the rain.’ The second one is what a sponsored child drew when asked to do the same. The first one, because a single color was used, means that the child has ‘feelings of hopelessness’; his facial expression signifies unhappiness; and he must have a ‘low view of self-efficacy’ because he did not draw an umbrella in the hand. The second one, because of all the color that is used, means the child is hopeful and optimistic; and she must have a high view of self-efficacy because she drew a smile on the face, and added an umbrella in the hand and the sun peeking out. Percentages are thrown around at this point in the article too. “Compassion children…were 13 percentage points less likely to draw themselves as a tiny figure,” for example.

The two drawings that are included in the article, though, are from children widely dissimilar in age. The first one is by an unsponsored child, but he is a five-year-old boy. The second one is by a sponsored child, but she is a thirteen-year-old girl. Should the choice of drawings that are put on view make us suspicious, maybe? This is obviously the main thing that is offered up to convince us of the success of child sponsorship. Not only is false philosophy being used to convince us of something here, but vain deceit as well. The ‘psychometric happiness index’ (p. 24) is the false philosophy; the choice of drawings (p. 25) is the deceptive support. For some sake of honesty and self-respect, Bruce Wydick feels that he must tell us the age of each child artist. But this important distinction is not discussed, and we are expected to make little note of it. (The ages do not appear plainly over by where the drawings are put in; I wrote them in myself.)

The reason behind the bleakness of drawing A, might it not have something to do with the artist’s age? Would this five-year-old boy even think of putting an umbrella in the hand? Has he ever seen one? Does he know how to make mouth and eyes to smile on paper? Would he not be less apt than the much older girl to use a variety of colors? Would he be less apt, maybe, to put a sun in the picture when not asked to do so?

The Providence of God, in its special, more noticeable features, is so often a great helper to me. A few weeks before I read this article, I put on the wall over to the right of where I do my reading, a bulletin board with a child’s drawings pinned to it. I had marked down, after the drawings were done, the age at which each drawing was done. The artist, as a four-year-old girl, drew a dinosaur on one paper and a monkey on the other, each in a single color scheme, in spite of many colors being available to her. Also, neither animal was drawn with smiling eyes, and only the dinosaur was given an upturned, happy mouth. As a five-year-old, she drew a picture of me swimming on one paper and another of her grandma swimming on the other. In each drawing, several colors were used, and on each person, the mouths and eyes were made to smile. 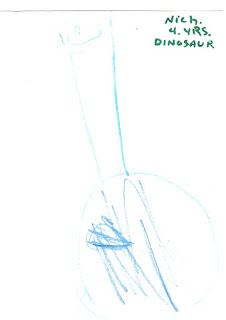 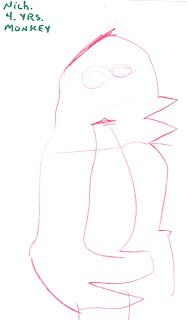 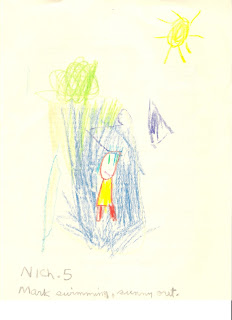 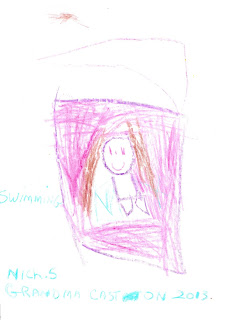 Observe, there is much bleakness and singularity of color in the first set, compared with unreserved happiness and multi-colors in the second set. What made the difference? Is the difference on account of her being an unsponsored child at the age of four and then a sponsored child at the age of five? No, for she was a spoiled first-world brat (whom we love) during the drawing of each set, but one year older during the drawing of the second set. That’s the great difference that a little age can make in the drawings of a child artist.

What great difference might there be, do you think, between the artistic abilities of a five-year-old boy and a thirteen-year-old girl? Is the disparity of content and aspect between one drawing and another due to child sponsorship? Or might age alone have a lot to do with the disparity? Notice this also: the five-year-old boy was given white, lined paper to draw on, very drab; but the thirteen-year-old girl was given colored drawing paper to do hers on, very pretty. Might that kind of disparity influence what one might draw?

There is yet one more clue to this article being fishy. There is a full-page ad (page 6) in this issue for Compassion International. Beside this (page 7) there is an almost full-page appeal for the support of it. Put this all together: the ad, the appeal, the article with its opportunistic choice of drawings, the index gobbledygook, and you have a conflict of interest, unchristian philosophy, deceit, and propaganda. That’s Christianity today, folks. A person should not be protested against, not even so much as one word’s worth, if he were to call the creators of this project devious miscreants instead of devoted Christians. “Hope is a fuzzy concept for economists,” Mr. Wydick says on page 23. Maybe, and the practice of deceit should be a fuzzy concept for Christians. “I would have you wise unto that which is good, and simple concerning evil” (Romans 16.19.) Application here: Do not yield to the use of trick-psychology and deceptive execution.

Every time I buy this magazine (about once every two years) I am reminded of the downgrade Western evangelicalism is on and of how rapid the decline is. Because the timing of this issue so coincided with my bulletin board being put up: just in time for me to compare what is on it to the drawings in the magazine, it seems right to suppose that I was destined to buy the June issue of this measly magazine, not to learn anything by, but to teach something by. ‘Christianity Today’ is not very Christ-like, only representative of what passes for Christianity today. One could do several righteously condemning articles on the content of just one issue of this magazine. This is why I do not hesitate to make the generalization: ‘Christianity Today’ is representative of the low-grade spirituality that calls itself Christianity today.
Posted by thebibleandthenews at 12:00 PM