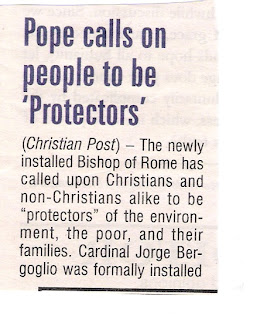 City Light News, April, 2013. Does a pope possess the moral authority to call on someone to be a protector? He calls on everyone to protect ‘the environment, the poor, and their families.’ When will he do his part? Who is he protecting? Should he not be protecting the persecuted? Who is more persecuted than those poor persons who have been abused by pedophile priests? There are many Roman priests who have been ‘outed’ as pedophiles and they have not received adequate punishment. And the bishops who covered for them need to be punished also. Pope Francis calls people to be protectors. When will he be an example by protecting children instead of the priests who have molested them? Does he even care for the poor? A pope who cared for the poor would have a heart for the persecuted also, would he not? A pope who cared for the persecuted would punish pedophile priests, would he not? Have we heard of any measures being taken by this wannabe to that end? No, and we are not likely to hear of any. The pope’s purpose is to protect the power in . This is his chief concern. If you are a victim of pedophilia by a Roman Catholic priest, you have learned that popish protection means no protection at all for you.

“Ye are of your father the devil, and the lusts of your father ye will do” (John 8.44.) When will Pope Francis speak to his pedophile priests in this righteous, condemnatory fashion? What moral work could be more important for Pope Francis to do than to rush upon guilty pedophile priests, with legal aid and force, and beg the book to be thrown at each guilty priest under his charge? The pope has no spiritual power, except from the devil maybe. But he has great political influence. He could make this happen. No force upon earth prevents him. If he were a just man, would he not do this good deed? If he were a just man, would he not begin by quoting Jesus’ words to these molester-priests and then sic the law on each one of them? It was Jesus’ mission to preach, heal, forgive the repentant, live holily, and die on a cross for the sins of man, not dole out civil justice. But it is the mission of a minister of God’s church to excommunicate evildoers to the ‘destruction of the flesh’ (1 Corinthians 5.5.) This kind of judgment is to the purpose, after all, that the spirits of these evildoers ‘may be saved in the day of the Lord Jesus.’ Why does the pope not do it then? Is he not a true minister of Christ? Does he not care for the souls of his priests? Maybe he cares for their souls as little as he cares for the children they have molested. A true minister of Christ would exercise discipline, just as the Bible commands him to. “Even so faith, if it hath not works, is dead, being alone” (James 2.17.)
Posted by thebibleandthenews at 8:56 PM