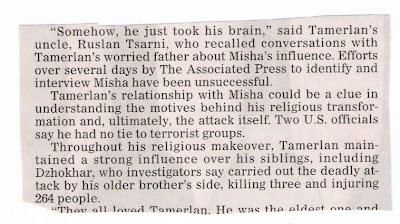 Red Deer Advocate, April 24th, 2013. This news clip provides a summary of how influence played its part in what we now call the ‘Boston Bombings.’ How are people made to sympathize with an evil cause? ‘He just took his brain,’ said the uncle about how Misha influenced Tamerlan. In turn, Tamerlan ‘took’ Dzhokhar’s brain. The result is a terrorist strike, multiple murders, mass crippling, emotional trauma, ongoing anxiety, and, hopefully, death to the surviving murderer.

The Bible, in simple language that every reader can understand, warns against your brain being ‘taken’ by extremists. “My son, if sinners entice thee, consent thou not. If they say, come with us, let us lay wait for blood, let us lurk privily for the innocent without cause…My son, walk not thou in the way of them” (Proverbs 1.10, 11, 15.) A brain that is uneducated in morals is in imminent danger of being ‘taken’ and made to sympathize with evil plots and deeds.

It is coming out now that the guilty parties were immigrants to the who were more lazy than industrious. You really have to watch your brain when it has already given in to a ‘poor-me’ ‘have-not’ mentality. Go downtown (almost any town will do) among the tax-takers who can work but won’t, and there you will find many brains ‘taken’ by conspiracy theorists who spout nonsense, like 9/11 being an inside job, for example. Why is that? When you believe that society owes you a free living, this naturally leads to the belief that society is against you even while it pays your bills and that this society is against you even from the top down in the most violent way. You people who believe that President Bush or the CIA is responsible for 9/11, watch your brain. It is ripe for being recruited.

Some brains are ‘taken,’ not by extremists or conspiracy theorists, but by sophisticated philosophies. The brains over at the CBC are of this type; that is, almost every CBC brain that I hear over the radio is of this sort. The CBC brains that are ‘taken’ are not terrorists, nor do they openly endorse terrorism. But their rhetoric vis-à-vis terrorism is often scary in the extreme. When the second bomber (Dzhokhar) was caught in , the citizens who were gathered to witness it started chanting, ‘! !’ Susan Bonner (a CBC journalist) was on the scene, and what was her comment about that? It was ‘hard to watch,’ she said. No, Susan, we don’t chant like that for when evil is overcome because evil is seldom overcome up here. When evil is overcome, some of us might want to chant, if that’s okay with you. Where do Susan Bonner’s sympathies lie? She couldn’t sympathize with the chanters? She was offended by cheers for justice against a murderer? You see, she was concerned about the ‘show of force’ by the police against a ‘nineteen year old boy.’ Those were her sentiments exactly. I heard it on April 21st on CBC’s Cross Country Checkup. This is what happens when liberal philosophy takes over your brain. Rex Murphy, the program’s host, also expressed concern about the show of force, though not in so many words. Remember that your political idol, Rex, invoked the War Measures Act against the FLQ! Those who listen to the CBC are usually of the same mind as the radio hosts. One caller into Rex’s show was ‘so sorry a young life is wrecked,’ referring to that of the nineteen year old terrorist. Not one word of sympathy from that caller, though, for the victims. On The Morning Edition (another CBC program), I heard the same trendy thoughts. The concern there was the possible waving of Miranda rights, which would be to the purpose, it was pitifully said, of interrogating the suspect vigorously even while he lies seriously wounded in the hospital! This is how the discussion was framed! What misplaced sympathy! The CBC is liberal for every freedom that terrorists want to eradicate, yet its voice is always terrorist-friendly. I have often reflected on this anomaly. The best answer that I have for it may be just a conspiracy theory, especially since it comes from a man who believes in many of them. But even a person who imbibes conspiracy theories is right sometimes, usually because he has unwittingly picked up some nuggets of truth during his frenzied gathering of oddities. He informed me that when a political wing goes far enough to one side or the other, it begins to rub shoulders with the other extreme. Terrorists want dictatorial government, except for its elite members who are free to do as they please. The CBC promotes a dictatorial nanny-state, and wants to limit freedom of speech and association so long as they and their special interest groupies are exempt. Extreme leftists and right-wing extremists are similarly minded politically. They just want different kinds of dictatorship. The CBC, though, when it caresses terrorists with soft words and sympathy, is like a child reaching out to pet a mad pitbull. The Taliban and company are not into rubbing shoulders with people who are bent on making their women into harlots and bosses. To terrorists, justice; to the people under their tyranny, decency: this is the only reasonable approach. Only then can we hope to change nations for the better through our communications with them. And if you bring a well-balanced morality with you, the gospel might be listened to with attention. Too bad that the CBC, with its gutter ethics and irreligion, is what so many terrorists believe Canadian Christianity to be!

Those who yield their brains over to conspiracies to commit murder usually get snared in this life and they are certain to be judged in the next. Those who show concern for terrorists at the expense of victims, they are on the broad way leading to hell too, on the strength, not of heinous crimes, but strange philosophies added to sinfulness. If your sense of justice is as shaky as what you hear emanating from CBC radio, then the mercy of God has likely never got into your senses. How come? Because salvation from the penalty of sin comes to the affections through an understanding of God's mind as revealed in his word; and mercy received from God soon gives birth to a sense of justice toward those persons who God declares the law ought to punish. ‘Thou shalt not kill’ is a meaningless commandment if it doesn’t mean there should be severe penalties for the crime of murder. “Whoso sheddeth man’s blood, by man shall his blood be shed: for in the image of God made he man” (Genesis 9.6.) This is the biblical ideal. It is largely believed at the CBC that man is an evolved monkey. Why not pity bombers if you believe that? Monkeys are sinless, after all. Whatever philosophy we believe affects where our sympathies lie. When you have sympathy for bombers, your philosophy is to blame, and it is time for a change.
Posted by thebibleandthenews at 11:44 AM