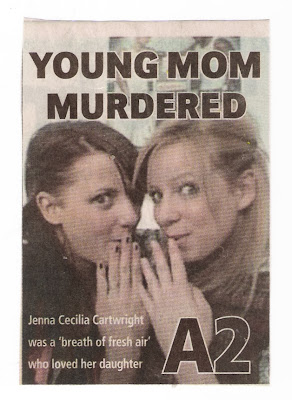 Red Deer Advocate, May 7th, 2011. There are several ways we could go if we were to deal with the article that this front-page picture points to. Jenna is the young woman to the right; her surviving twin, Marissa, is on the left. Jenna was a single mom who got in with the wrong crowd, the article says. She went from smoking pot to using meth, which lifestyle likely led to her premature death. So there is a sermon of sin leading to greater sin, and of sin’s ultimate issue: death. Don’t sleep around; don’t do drugs; sin is your enemy; determine to have Jesus for your Saviour.

Our subject, however, is in how this newspaper used the murder of a young woman to further its cause to sell more papers. Whether Laura Tester, the woman responsible for the article, is also responsible for pasting the misleading picture that makes fun of murder, I do not know. But it does say just above the article that she is part of the Advocate Staff.

Now look at this picture. What you immediately discern from it and the caption above is that here are two girls naughtily whispering about a young mom that has been murdered. They seem to be whispering about the murder as if murder is something one should snicker about. Don’t miss what’s going on here. This newspaper got some picture of the murdered mom with her sister, then pasted that on the front page, making it look as if the girls are snickering about murder, when one of the girls just happens to be the one that got murdered! And why did the paper do this? We all know that evil maneuvers like this are done to boost sales and to make money. Do you think that the murdered mom would approve of having it appear as if she thought so little of murder that she would snicker with her twin sister about her own?

This is the kind of obscene trickery that newspaper staff will resort to in order to sell more copies of some two-bit newspaper! It’s a pity that the murdered woman’s family did not sue this paper for all it’s worth! The Bible is not silent on sin, no matter what kind it is. “Yea, they are greedy dogs, which can never have enough, and they are shepherds that cannot understand: they all look to their own way, every one for his gain, from his quarter” (Isaiah 56.11.) Are not newspaper staff shepherds of a sort? Do they not lead us into the news of the day? Then this quote from Isaiah is close enough to the mark. Is there no special punishment from the LORD regarding sins committed for the sole purpose of making money? Take heed, Red Deer Advocate, and especially the person responsible for this shady piece of business. “He that is greedy of gain troubleth his own house” (Proverbs 15.27.) The LORD will repay anyone who dares to gain from making murder into something fun to gossip about! Today’s ministers think ‘repent’ is an outdated word that sinners do not understand. If the word is not understood, why do sinners hate hearing it so much? “Repent ye therefore, and be converted, that your sins may be blotted out” (Acts 3.19.) Christ has suffered for the sins of all who choose to repent. There’s the gospel, Calvinist style. If a person may be forgiven the sin of murder (and he certainly may), then how much more may a person be forgiven for making fun of it?

Why don't the pastors in my city tackle a public sin like this? Because they are uncaring, clueless, clued out, or cowards.
Posted by thebibleandthenews at 9:02 PM