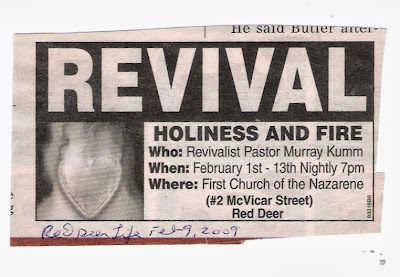 Life, February 9th, 2009. To presume is to take something as granted. The ultimate presumption is to presume that God will bless.

Was there a revival at this Nazarene church just as announced? No, there were meetings. A revival we would have heard something about.

Almost five years have rolled by since this ‘revivalist’ had his ‘revival’ meetings at the of the Nazarene in . Was it a famous revival? Do people talk about it today as a great outpouring of yesteryear by the Holy Ghost? I don’t think so. More likely, there is no distinctive memory of it among those who attended. How different that is from the effects of a real revival. Hear what an Episcopal minister had to say, even twenty years after the event, about revival striking his community in South Carolina through the preaching of Daniel Baker in 1831: “Such was the pervading influence of the religious principle upon the whole aspect of society, that it cast it into the gospel mold and stamped it with its own holy features…For twenty years past there has been a higher moral and religious tone, and a more intelligent and consistent profession of Christianity maintained in that little town than in any other which the writer has visited in Europe or America” (Douglas Kelly, Preachers with Power, 23.)

This church of the Nazarene (if it were true to its name) would know what the Nazarene’s position on revival is: “The wind bloweth where it listeth…so is every one that is born of the Spirit” (John 3.8.) The Spirit of blessing blows where it pleases him to blow. He does not obey man’s presumptuous announcement. So there is Jesus’ own word on the matter.

When you see an ad like this put out by a church, do not wonder if it’s worth your while to attend its ‘revival’ meetings. It is a great sin against God to presume he will save en masse just because a pastor predicted he would. Better to take no part in affairs like that. When someone calls himself a ‘revivalist,’ do not presume that a revival will take place through his preaching. There is no such thing as a ‘revivalist.’ One would have to be God in order to know when and where a revival will occur. The man who calls himself a ‘revivalist’ is attempting to stand in the place of God. We should be surprised that the Holy Spirit does not strike dead the man who presumes that a revival will happen through his preaching.

Notice that these pastors who announce what God is going to do usually predict a work of mercy from him. The word of God is about more than God shewing mercy, though. “Whom he will he hardeneth” (Romans 9.18.) That is the word of God too. Since God reserves the right to do one thing or another, it is just as possible that he will harden instead of shew mercy, is it not? We have many ‘revivalists.’ If we had something like biblical balance in force, would we not have ‘hardeners’ as well? Where are all the ‘hardeners’? God might harden as well as shew mercy, so where are they?

These ‘revivalists’ remind me of those false prophets who were always prophesying good things in Old Testament times. One has to wonder about all the ‘decisions’ they feel responsible for bringing to town. My guess is that the genuine dollars they walk away with number more than the genuine decisions they leave behind.

Whoever you are, saved or unsaved, know this: You are not bound to support a ‘revivalist’ or a church that welcomes one. Keep your money; save your time; do not presume. Say with David, “Who can tell whether God will be gracious….?” (2 Samuel 12.22.) Begin there, and rest assured that that will be less presumptuous in spirit than any ‘revivalist’ is. Do not run after revivals and ‘revivalists.’ Run after Christ by knowing all you can about him, by receiving all his teachings, and by obeying all his commands. You may be visited, then, with a merciful revival of your own. But never presume. Never do that. Presumptuous persons get no revival as long as they presume, not for themselves nor for anyone else.
Posted by thebibleandthenews at 8:28 PM