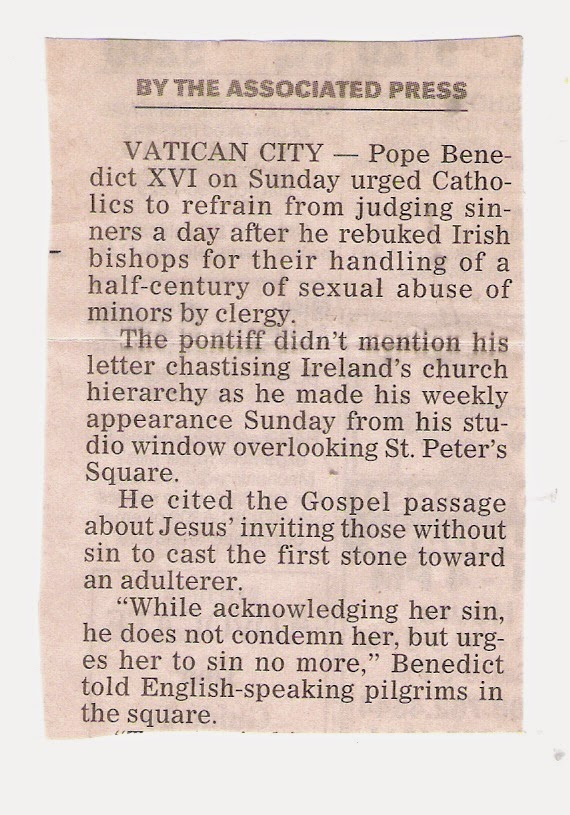 Red Deer Advocate, March 22nd, 2010. What does a pope say to his people about the pedophilic behavior of his priests and the associate cover-up by his bishops? What does he say to these people who stand aghast at what he has permitted to go on in his Church against innocent children? In essence, he says, ‘Don’t judge!’

The pope’s command is to refrain from judging sinners, by whom he means: officials of the Roman Catholic Church. He issues no punishment for pedophile priests and the bishops who harbor them and shuffle them around, and he urges the rest of his Church to withhold judgment too! Now there is a wretched exhortation! And it is weakly held up by a crooked interpretation of Scripture!

He was addressing his adoring Catholic followers when he gave out this abject exhortation, those devout but naïve souls who gather outside his window to listen to what they will unthinkingly regard as a holy pronouncement. Not many Catholics will judge. Some will, and have (through harsh words and donations withheld); these, hopefully, will abandon the Roman religion and find salvation as well. But every person, whether inside that Church or outside it, who is not guilty of pedophilia or of covering for pedophiles, ought to judge, and judge severely. The law, whatever one may be noble enough and brave enough to stand up to Vatican City, should judge both the pedophiles and their protectors, even with something as sharp as a literal sword! If we love children, that is what needs to happen. Really, the nation of Italy should do it, for it is nestled there and should be subject to Italian justice. The Roman Catholic Church, if it were true and not false, would obey Romans 13 and submit to the ‘higher powers’ (verse 1) of jurisprudence. State rulers are said there to be ‘a terror to…the evil’ (verse 3.) The state of Italy should flex its muscle and become a terror to pedophile priests.

The passage cited by the pontiff in support of this exhortation not to judge is John 8.3-11, which concerns the woman taken in adultery, who was condemned by the scribes and Pharisees but let go by Jesus. If no actual sword will be used by a State to judge pedophile priests and the bishops who cover for them, Christians may at least use the spiritual sword, the word of God, to show why rigorous judgment is warranted.

Jesus challenged each accuser to cast the first stone at this adulterous woman, which challenge caused the accusers to walk away one by one without judging. What lesson are we to take from this event? Does this mean that we should not punish priests who have molested children? Does this mean that we should not punish members of the Roman Catholic hierarchy for allowing these foul priests the freedom to commit such wicked, unholy deeds? If this is what it means, then pedophiles will continue to multiply in that Church, and their deeds, however horrific, will continue to spread with impunity. If this is what it means, then priests are allowed to molest children. That’s what it comes down to. Our conscience screams out that this must be no lesson at all for Jesus to give, for lawlessness must then result, and Jesus was neither immoral nor amoral, much less an outlaw! Our conscience may be relieved by observing the right connexion, because the right connexion yields the lawful lesson. According to the law of Moses that the scribes and Pharisees professed to follow, the penalty for adultery was stoning, or death. There is the connexion that would save us (and the pope) from tolerating the intolerable. This is the crucial connecting piece. He who is not guilty of a sin of that magnitude, let him cast the first stone. That is the gist of the challenge. The accusers melted from the scene (did no longer judge) because Jesus showed that each one of them was guilty of a sin of the same degree as the one committed by the woman who stood condemned. “He that is without sin among you, let him first cast a stone at her” (John 8.7.) How do we apply this? If you are a pedophile, or a protector of one, no stone can be justly cast by you. You are not fit to judge the matter. The rest of us, though, may throw all the stones we like. (Too bad we may throw just verbal stones!)

Notice one thing more. Jesus urges this woman to sin no more. On the ground of her future obedience, then, she should not be condemned by her guilty accusers. That is the point being made. But pedophile priests have committed pedophilia again and again after being told by their bishops over and over not to do so. And the bishops have allowed these pedophilic sins to go on and on by covering for the guilty priests again and again. Their grace card has already been used up. And so some kind of condemnation ought to come down, finally, on these perverts and their protecting masters of deceit.

Notice who the parties are. That event in John 8 concerns the sin of adultery, a sin between consenting adults. Pedophilia, or the cover-up of it, concerns a sin between man and child. We might not want to judge the sin of adultery with a heavy hand these days. But pedophilia is not adultery; it is something far worse, a sin upon a child victim by an adult predator. To use the event of the woman caught in adultery as an argument against judging pedophiles and their benefactors is an illegitimate use of Scripture to convince people not to judge obscene attacks and the conspiracies that conceal them.

Notice the difference between a sin and a crime. Adultery is a sin at least, even when it is no longer considered a crime. But who can be so ungodly, unrighteous, unbiblical, cold, and callous as to not admit pedophilia to be both a sin and a crime? The pope, apparently! His refusal to judge is our proof. His urging everyone else to follow suit is proof again. Do not judge perverted priests; and do not judge the underhanded bishops (who should be held to a higher standard than priests) for their continued colossal cover-up of countless indecent assaults upon minors, decade upon decade! which cover-up, all reasonable people know, amounts to facilitation of the crime, if not complicity in it! That is what we are being urged to do by this no-good pope! Those who, by silence or treachery, make it possible for known pedophiles to run loose and victimize, ought to be judged as harshly as we should judge pedophiles! The pope should do something about all these sins and crimes. He should judge. He should penalize. As head of a Church crawling with pedophile priests, he ought to solicit the help of civil authorities in order to stop these rapacious creeps from ever having opportunities to terrorize again. This he will not do. It is beginning to come out that the pope is a cover-up artist too. When does a State step into the jurisdiction of a Church? When the Church is guilty of doing violence to the citizens of a State. The jurisdiction of Vatican City ought to cease to exist in that circumstance. The Bible gives us no warrant at all for belonging to a spiritual kingdom without being accountable to a civil State. Romans 13 is very clear on that. The very idea of Vatican City as a State is wrong. It ought to be subject to civil law where appropriate: like when priests are found guilty of molesting or raping kids. If the pope were truly holy and biblical, he would work to make this happen.

It is in vogue nowadays to refer to God as a ‘guy’ or ‘the guy in the sky.’ There seems to be more reverence for the pope than for God in certain circles because the pope is never called ‘the guy,’ is he? But the pope is a guy, alright; he is the ‘bad guy,’ the ‘wise guy.’ This guy is a poor interpreter of Scripture too. The reasons for this: spiritual blindness and corrupt motives. Is it not evident that the man who uses the Bible for unholy purposes (to deny justice and to whitewash filthy reputation) must be in the direst need of spiritual life in his soul? Who but an unregenerate degenerate would tell you to not judge pedophiles and their guilty bodyguards? Is it wrong to suggest degeneracy and unholiness in a man who is revered by so many as the ‘Holy Father’ and ‘Vicar of Christ?’ Jesus calls false prophets ‘ravening wolves’ in ‘sheep’s clothing’ (Matthew 7.15.) What are pedophile priests but ravening wolves? What are their protecting bishops and coddling cardinals but wolves that watch over the ravenous? And what is the pope? What do we call the man who can, but will not, judge the bloody wolf-pack (the raping of children must often be bloody!) under his command? His refusal to judge unclean sins and vicious crimes makes him the Alpha wolf! “Ye shall know them [even the pope] by their fruits” (Matthew 7.16.)
Posted by thebibleandthenews at 12:52 PM