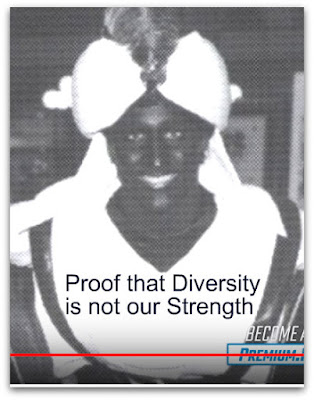 Cross-Country Check-Up is a two hour CBC radio broadcast, without commercials. I listened to every minute of it this weekend because I knew that it was going to be about Prime Minister Blackface, which subject would have to touch on racism, one of the main doctrinal planks in the CBC’s Identity Politics Textbook. Racism is as important to the CBC as the Deity of Christ is to Christians. It is one of the tenets that they imagine to be saved by. It is one of the doctrines that their redemption, such as it is, hangs upon. It is a fundamental, indispensible component of their Systematic Atheism; it is quintessential, classic, archetypal CBC Dogma. Surely, then, the CBC would never give a pass to any man guilty of it, least of all the preeminent virtue signaler in the history of Canada. Prime Minister Blackface would have to be boiled alive in water taken from his ‘paper drink box water bottles sort of things.’ Racism is, according to CBC employees, one of the capital sins that the guilty party must, without mercy, be entirely and irrevocably run down for having committed; it is one of the abominable, unpardonable sins that Blackface Trudeau, by his own admission, is guilty of. That should settle it. The CBC would have to brand him forever with the R that is usually reserved for conservatives, disown him as they would a member of the KKK, and dog whistle some violence to be done to both him and his family, just as they have signaled should be done to the good man down south who has achieved the lowest unemployment rate for black persons in the history of the USA. So yes indeed: I listened to the broadcast in full, in toto, au complet. Capiche?
During these two hours of uninterrupted conversation, the host of this call-in show had six guests on and took twelve calls. Those are shameful numbers for a two hour call-in show that has no commercials to accommodate. Why so many guests? Having that many guests on was a way to chew up time and avoid taking calls. But why chew up time and avoid taking calls? This was done in order to save Trudeau from being roasted. Five of the guests were apologists for Trudeau; only one was not. That was no accident; the CBC chooses guests very carefully, and knows beforehand what position each guest will maintain. While Pepperidge Farm remembers, the CBC makes sure. One guest was a coach of sorts that politicians turn to in order to learn how to apologize. In his opinion, Trudeau set a good example by the way he handled his apology. If the CBC host had acted more like a journalist than a Liberal campaigner, he would have thrown the following points in the guest’s face: If a politician is coached on how to apologize, the apology must be manufactured, not genuine; and no one who determines to apologize from the heart needs to be told how to do it. Then the host could have followed up with this point: That man who makes money by coaching politicians on how to beguile citizens with a synthetic apology—that man is a greedy, opportunistic, immoral maker of hypocrites. As for the callers, the CBC carefully screened them in order to make it appear that Canadians lean in the Liberal direction. Seven callers were Trudeau’s continuing supporters, while five were against him. When the pro-Trudeau callers were on the phone, they were gently handled, and were allowed to yip and yap. When the contenders were on the phone, they were countered by the host, or made to consider pro-Trudeau emails that were read. During the show, eleven emails were read; seven were for Trudeau, four were against. The selections were made to make Trudeau look more popular than deplorable. The show, from each perspective of it—whether of host, guests, or callers—would have been orchestrated to lean at least 95% against any Conservative politician if he had been stupid enough, shallow enough, and weird enough to have blackened his face even one time in his life in order to mock or to play the fool. Indeed, if it were found out that a Conservative had blackened his face during Halloween as a child, the CBC would depict him as the reincarnation of Hitler, he would be hectored into early retirement, and maybe physically attacked by a leftist posse.

The CBC could not campaign for Trudeau 100% on this episode of Cross-Country Check-Up, because Trudeau, to save his job, admitted to having been a racist. But by tipping the balance in favor of Trudeau as much as they did, the CBC has shown that Liberal power, not racism, is what matters to them. The CBC does not believe in its dogma very deeply; CBC hosts are as nominal in their faith as a pedophile priest is in his. They are ideologues, true; but their tenets change with times and circumstances, and each tenet has its breaking point. To hosts at the CBC, whatever comes close to a minstrel show must be the epitome of racism—unless the self-confessed racist involved is their benefactor, even if that benefactor is patriarchal and white, not to mention a groper and a crook.

As I listened to the program, a theme began to dawn. The theme was: we must ‘move forward,’ which means: we must forgive, forget, and reelect. The conclusion was, and nearly in these very words: Canadians are racist; because of this, we need more diversity throughout the land in all stations and situations; more immigration than ever, then, is what we need, whether through an open border or otherwise, and from countries that are the most backward and barbaric that can be found.

When Trudeau’s blackface was discovered and reported on by the Americans, the hosts at the CBC had to pretend to be offended. Possibly they had to feign surprise as well, because it is hard to imagine the CBC Liberals not knowing every detail in the life of the person that they adore. They keep track of Trudeau’s socks, but know nothing about his drama teaching days? They’ve counted the hairs on his head, but don’t know what he did in high school? A few days have passed since PM Blackface was exposed by Time magazine. Now the CBC must be getting back on the campaign trail to herd Canadians into Liberal stalls and to brand Conservatives with an R for racism, all in order to make it absolutely certain that they’ll be able to rob the tax train for another four years. And campaigning for Trudeau is precisely what they did on this Sunday’s Cross-Country Check-Up. So on Sunday on Cross-Country Check-Up, September 22nd, 2019, the CBC came to Blackface Trudeau’s defense as if a minstrel show by a white man is suddenly forgivable and as if conservatives ought to be reckoned white supremacists just because they are national enough and Canadian enough to want a border that functions according to the law: as a border instead of an open door.
In all my life, I have known only one person who painted her face black, and she did it on October 31st. How many citizens could name one person (other than Trudeau) who has blackened his face three times? How many of us could name a person who has done it even once? Any person who has done this three times since high school is obsessed with caricaturing black people, and might be, in fact, a racist for real. Why would a person paint his face black when depicting an Arabian like Aladdin unless it’s an excuse to indulge an obsession?

By putting himself out there as the identity politics maestro, Trudeau laid a snare for himself, and he has been caught in it. “A fool’s mouth is his destruction, and his lips are the snare of his soul” (Proverbs 18.7.) And since our nation contains the multitudes of fools that it takes to elect a fool to our highest political office, it is a fact that we too are being destroyed, and not just culturally and nationally. People so unwise and unrighteous as to elect a man who was so obviously going to be bad for the country—such people, with very few exceptions, if any, are too unenlightened to be on their way to heaven. Sinners who have been saved from condemnation leading to hell would not elect a pro-abortion politician and an open-border traitor. Our ballots may lead to the destruction of national sovereignty, savings, jobs, free speech, the right to private property, and self-defense; and the fact that we cast them for wicked politicians is a signal that we might be on our way to destruction of an eternal kind as well. How so? Because a people wise unto salvation would not vote for politicians who are so plainly against the liberty, goodness, and decency that the Bible says the lover of God likes to have for himself, his family, and his nation. As for Andrew Scheer, the man is too ashamed and cowardly to speak or stand for the liberty, goodness, and decency that at least some of us believe in. What politician, if any, is brave enough and conscientious enough to campaign, not on eradicating an imagined racism, but on making abortion illegal? In Canada today, our political choices are choices for evil. When this is our plight, it can be no sin to spoil our ballot. It is either that, or vote for a lesser evil than the one we presently have. In any case, “It is time for thee, LORD, to work: for they have made void thy law” (Psalm 119.126.) That work could involve mercy; but it might just as well involve pain.

Posted by thebibleandthenews at 9:58 PM