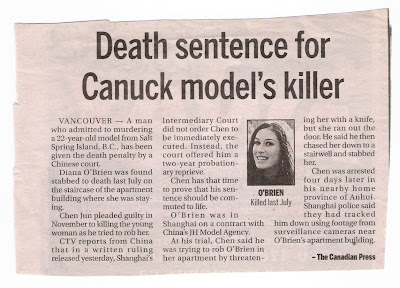 Sun, March 14th, 2009. If your death is to be by the crime of murder and you are that sort of person who believes in justice, then , not , may be the best place for your grizzly end to come about.

Women involved in that lewd business called modeling tend to become, before long, street-smart, wily, cautious, and cagey. But whether in or in , you just don’t know what awaits you round the next corner. You just can’t be on your guard every second of every day.

is notorious for the unjust killing of its own citizens; but it does judge its citizens who are killers. A totalitarian state exerts as much control as it can over its people. Whether against the people or for the people, it wields the sword to maintain order. (Hopefully, this crime was pinned on the right man.)

We should never pretend that modeling is a noble way to make to living. Who will deny that it’s all about the sins of vanity and greed? But neither should we shirk our responsibility to punish those who do harm to vain or greedy people. No matter who gets murdered, we should demand the death penalty for the crime. Totalitarian is brutal; but there is justice there for the crime of murder. Totalitarianism is an evil kind of regime. But it can sure do the job when avenging a victim! Three cheers for that!

We would not be cheering for full justice if the avenging of this wrong were left up to Canadian permissivism. (I’m not making this word up.) This is what the Canadian form of democratic socialism has spawned: permissivism. The more you permit, the less you punish. The less you punish, the more you permit again, until crime is no more crime. Justice here has gotten so lax that we find ourselves cheering, even for totalitarian justice! Not that we want totalitarianism for ourselves. But there is consolation in the fact that a Canadian is sometimes avenged for being murdered, as in the case (we hope) of Diana O’Brien. ‘Avenge’ is a good old word. The State exists, in part, to avenge evil. It is right and just to pray and vote for full measures of justice: life for life and tooth for tooth. Rulers should be a terror to evil (Romans 13.3.)
Posted by thebibleandthenews at 11:58 AM