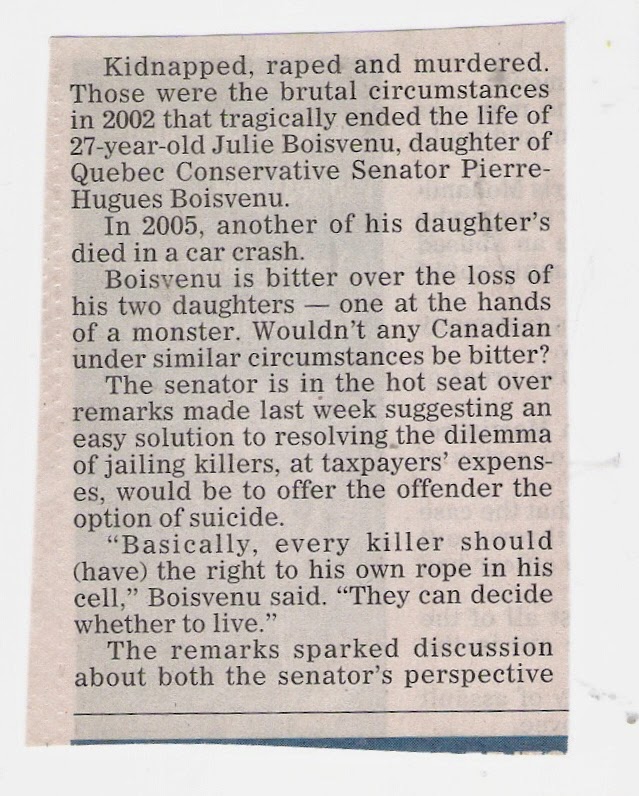 Red Deer Advocate, February 7th, 2012. Imagine being on the ‘hot seat’ because of a comment against people who should have been executed! Criminal-loving politicians and the media supporting them, how increasingly unreasonable they are! Not one careless word will be tolerated against killers; compassion for victims and their loved ones (who are victims too) always takes a back seat.

Suppose a law were passed whereby convicted murderers should be executed at once, or be allowed the means to commit suicide instead. Would you say anything against that if one of the murderers had murdered your daughter?

Things get emotional when you are the loved one of someone murdered. You should be permitted to wish out loud, anything you please, concerning murderers after that. Furthermore, anyone raising an eyebrow to your comment ought to be on the ‘hot seat’ for being a killer-lover.

Mercy, when taught in the Bible, never runs roughshod over justice. When mercy triumphs over justice, it is only because justice will be, or has been, fully satisfied. Mercy is released by justice being paid in full. The grace of salvation is on account of justice being satisfied by the Son of God. So it is a spiritual reality that he who repents of his sins may be pardoned: for the blood of Jesus Christ covers the sins of repenting men.

The civil reality, however, is that the sword of the State should come down upon all murderers. Romans 13 was not written for nothing, but for States to copy the example of. You may be set free from condemnation leading to hell, if you turn to God and confess your sins through Jesus Christ. But you should not be set free from punishment here on earth, especially if you are guilty of a crime like murder. Church and State have their separate functions. The one may pronounce a pardon regarding the life to come. The other must punish for crimes committed in this life. And so there is a minister of ‘the gospel of God’ (Romans 15.16.) And there is that other minister of God, ‘a revenger to execute wrath upon him that doeth evil’ (Romans 13.4.)

We are a long way from executing civil justice when you can’t say a word against murderers without being put on the ‘hot seat’ for it! Someone was even seeking legal action against the senator for his comment! Maybe he still is. Stunning stuff! But normal for ! Those who jump to the defense of murderers, even to the point of defending their ‘honor,’ ought to be told by as many of us who have the guts to speak up, that sympathy for murderers has to take a back seat to compassion for victims! Murderers have earned the right to be executed, not merely insulted.

But there is a hot seat in hell for each one of us who dies without having Jesus for our Saviour, be we little sinners or large. Let’s put that in before closing.
Posted by thebibleandthenews at 11:03 AM