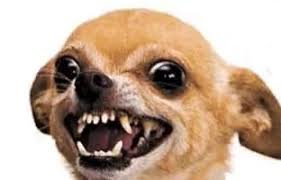 Feminists are like Chihuahuas. They make a lot of noise to get attention. They rely on others to compensate for their lack of bite. They are envious. And they are spiteful. I know this because we raised Chihuahuas at home when I was a boy.

This one Chihuahua that we had was called Tina. Tina is a good specimen to select for my comparison of feminists to Chihuahuas because, in spite of her positive attributes, she exemplified all the negative Chihuahua traits to a T. When a morsel of meat was put down for her to eat, she approached it with a dainty step. Then, after taking a sniff, she typically turned up her nose, and walked pathetically away. After this the cat would inevitably make an approach toward the morsel, anxious to eat what Tina did not think fit for consumption. But when the cat got close, Tina would threaten the cat and pretend to want the morsel. Tina would then guard the meat and grudgingly lick it to torment the cat.

The meaning of the parable is this. The morsel is the kind of man that every woman should want: the delicious red-blooded man. The Chihuahua is the feminist who does not want the man unless another woman wants him. She just wants a man as a delicacy to show off and to make other women jealous. The cat is the virtuous woman who actually wants the man, and for the right reasons.

This is not all though. When the cat became aggressive enough to make a try at getting the morsel, Tina would rush forward and gobble the morsel up. In like manner, the feminist will make her final move on a good man if she sees that a virtuous woman is about to take him.

After Tina devoured the morsel, I would have to rescue her from choking by massaging her neck to make the food go down. This is like the feminist who, by getting the good man, bites off more than she can chew, which causes her to choke, whereupon the government steps in to rescue her from her choice. Unlike Tina (the parable breaks down at this point), the feminist spits out the man, who, frequently, is either too used up to attract a good woman, or so put off that he never marries again.

“It is better to dwell in a corner of the housetop, than with a brawling woman in a wide house” (Proverbs 21.9.) Who is more brawling than a bawling feminist?

Posted by thebibleandthenews at 7:15 PM