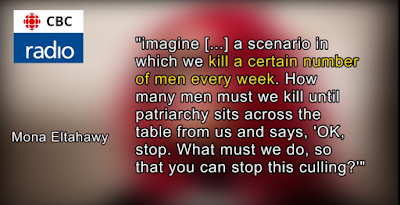 We Pay the CBC $1.5 Billion Dollars Annually so that Radical Feminists Can Discuss Murdering Men on the Air?


Thanks to Janice Fiamengo at StudioBrule for catching this, and for quoting the man-hater word for word. This is the kind of hatred and incitement to violence that is recruited to guest on the CBC, yes, the CBC that costs taxpayers about 1.5 billion dollars each year. The guest is Mona Eltahawy from the middle-east; the host is Piya Chattopadhyay of East Indian heritage. And this is the Canadian Broadcast Corporation, folks. It exists to import man-hatred, among other evils.

If men spoke like this about women, their medium would be shut down and the men would face charges.

Women are so oppressed in Canada that they get to talk about murdering men while men are accused of being aggressive just for refusing to sit with their legs together! Women are weaker vessels indeed! They are so weak that they must always be given rights that men don't have.

One day, hopefully, sins committed at the CBC will be dredged up as an argument to defund it. In any case, the Day of the LORD will not fail to punish hate-filled feminists.

“For we must all appear before the judgment seat of Christ; that every one may receive the things done in his body, according to that he hath done, whether good or bad” (2 Corinthians 5.10.)

Posted by thebibleandthenews at 11:12 PM