Poppies on a Cross? 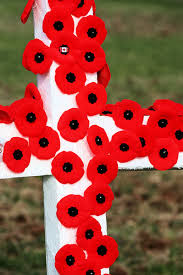 Our nation takes time to remember the men who fought and died for our freedom. It is our custom to do so every November 11th. This custom is a gesture of respect for those who deserve to be honored, and it should continue.

We brethren take time to remember the Savior who suffered and died for our salvation. It is a custom that some churches still observe every Sunday. This custom is in response to a command given by Jesus Christ, and so the custom should continue.

I’d be confused if I saw a cross on a poppy; and I’m nearly as confused when I see a poppy on a cross. Yes, I can see the analogy of the soldier’s death to that of Christ’s death—his gift of freedom and our freedom in Christ. But what I can’t figure out is why a Christian would put poppies on a cross in an attempt to bring honor to our men of war.

If you look at the cross, a symbol of Christ’s sacrifice, and you remember men of war rather than the Prince of Peace, or a mixture of the two, I think that takes away from the honor that is due Christ. Especially is this the case when the poppy laden cross stands in the sanctuary, the official place where Jesus Christ is supposed to be honored above, or even to the exclusion of, everyone else. Shall we dishonor the Lord in our attempt to honor military veterans?

Christ’s first coming had nothing to do with war, and little or nothing to do with democracy or politics. Jesus died for sin in order for sinners to reap an eternity of freedom. But, unlike soldiers, he did not kill anyone or even fight anyone in order to provide this freedom. The symbol of sacrifice that soldiers made should not be applied to the cross, for the cross represents Christ’s sacrifice for sinners, and nothing else. A weaker, or more sensitive, Christian, not to mention an unbeliever, might construe the fusion as equating the death of Christ with the death of sinful men. Commixing these symbols implies that we may elevate the sacrifice of sinful men to the level of sacrifice that Jesus made. At the very least, a cross with poppies on it reminds us of other persons than the One who died on the cross for sin. This fact should be sufficient to discourage the practice of putting poppies on crosses on Remembrance Day. A cross with poppies on it distorts the meaning of the cross. It puts human tradition where it does not belong—on what symbolizes the only satisfactory sacrifice that has ever been made, and that can be made, for sin.

It is debatable whether we should use a cross at all to symbolize the death of Christ. He has given us bread and wine to remember his sacrifice by. But that is a different issue.

Posted by thebibleandthenews at 10:13 PM