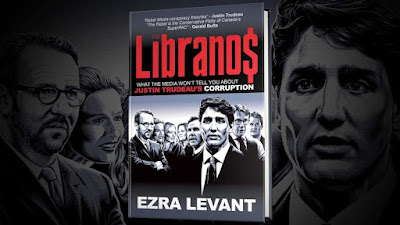 As the cover of this book artistically shows, the Libranos is the Canadian Liberal government. Liberal Prime Minister Trudeau and his political operatives are the Libranos, just as Prime Minister Chretien and his Liberal network were the Libranos back before the less corrupt days of Conservative Prime Minister Harper. ‘Libranos’ is the word ‘Sopranos’ Liberalized. The Sopranos is a show about a fictional mafia family. I have never seen the show, and it probably no longer airs.

We who watch the Ezra Levant Show do not learn a lot about Trudeau and his Libranos from this book. We have been well informed by the show. But The Libranos should be read by everyone who relies on the CBC, the CTV, the Globe and Mail, or the Toronto Star for news about what really goes on in our capital when the Liberals are in power. This is ‘the other side of the story,’ which is the motto of Ezra’s Rebel News. Of the two dozen or so books that have been written about Trudeau, The Libranos is the only one that has been singled out by the Liberals for censorship; the only one whose author has been interrogated, Communist-style, for writing; and the only one that has shot up to number one on Amazon (Canadian side) after the Liberal government’s goons were shown, on video, trying to scare its author. It was after Ezra published the video of the interrogation that I decided to read the book. An author who is grilled by government-sent goons for the book he wrote is an author who deserves his book to be read. An author who is targeted, intimidated, and threatened by the government for the book he wrote deserves his book to be read. An author who stares down former RCMP officers in a scary back room must have written an important book that embarrasses a corrupt government; he deserves his book to be read.
The statement that best summarizes the corruption, which is carefully backed up with facts and figures, is this one: “Butts [Trudeau’s best friend] may have earned enough to retire after just three years working in government” (p. 131.) This possibility is understandable from the fact that ‘more than $300 billion in new debt’ has been run up since Trudeau took office (p. 125.)

Watchers of Ezra’s show may not learn a lot from this book. But we do learn a little. In chapter four we learn some things we didn’t know about the Charter; in chapter eight we learn more about the festival where Trudeau groped a reporter; in chapter eleven we learn more about Trudeau’s truancy. In his first year as PM, he “flew off to tropical St. Kitts, went skiing in Whistler, celebrated Carnaval in Quebec, chilled at an exclusive resort on Fogo Island, N.L., surfed in Tofino, hit the beach in the Bahamas, added extra personal time to an official trip to Japan to celebrate an ‘anniversary’ that had actually already passed, and caught Hamilton on Broadway during a getaway to New York City” (pp. 131, 132.)

That quote about Trudeau’s many vacations is one out of only two sentences that I check marked for eloquence. This book is far less eloquent than it is average. It is written in the popular point form style, often with short sentences that stand in for whole paragraphs. The sentence fragments are particularly wearisome. “To repeat: Trudeau. Hit. A. Woman. On the floor of the House of Commons” (p. 88.) Writing like this, to use Ezra’s own word for something he hates, is ‘gross.’ A writer should have too much respect for the written word to write like that. No matter what we write, it should be written well, even if it’s a book of nonfiction. The other annoyance is the lack of editing that went into this effort. If I had counted all the faults that an editor should have caught, like the unintentional repeating of words, the number would have risen to fifteen or more. Sometimes the line spacing even varies. Inadequate editing may demonstrate that Ezra Levant is on a low budget like his viewers are on. But even a writer on a low budget can get better editing done than this.

Though this book is brief enough to be called a booklet, it is annotated to the number 289! This is the book’s greatest strength: whenever wrongdoing is alleged, it is alleged with evidence. When its author was interrogated for writing the book, he was berated, not for defamation, but for publishing. This fact, all by itself, suggests that the Liberal government has totalitarian tendencies, but also that the book it is trying to ban must be full of truth.

Posted by thebibleandthenews at 7:45 PM